Margot Sanger-Katz (@sangerkatz) covers health care for The Upshot at The New York Times. She was a health care correspondent for the National Journal and, as the recipient of an AHCJ Reporting Fellowship on Health Care Performance, she produced a series examining hospital consolidation and its influence on health care costs and the future of health reform.

View all posts by Margot Sanger-Katz → 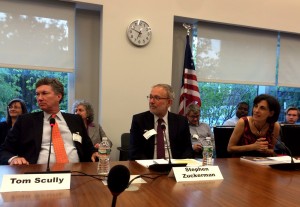 Open enrollment is coming again. And with millions of new people signing up for health insurance and renewing their plans come opportunities for new stories about how the Affordable Care Act is working.

Stephen Zuckerman, a senior fellow at the Urban Institute and Tom Scully, a former administrator at the Centers for Medicare and Medicaid Services who now works as a private equity investor, spoke to an AHCJ chapter meeting in Washington, D.C. about the possible stories ahead.

The meeting was co-sponsored by the Alliance for Health Reform. Attendees enjoyed some wine and beer and light food ahead of the gathering on Sept 18.

Speaking at the new National Public Radio Headquarters, Zuckerman and Scully urged about 20 journalists in attendance to focus on the structure of the Affordable Care Act and how it was influencing insurance coverage and the federal budget. Scully encouraged reporters to dig into the underlying health programs expanded by the law – particularly Medicaid. Zuckerman pointed to the many people who are likely to continue to find health care to be a financial stretch.

Both agreed that, whatever their quibbles with the law, it is here to stay and deserves scrutiny as a permanent and consequential change in the health policy landscape.

“I don’t care what happens in the election,” Scully said. “This thing is not being repealed.”

1 thought on “D.C.-area journalists get tips on upcoming ACA stories”