View all posts by Andrew Lowndes →

Reporters need to think carefully about the language they use when reporting on suicide, a panel of experts urged during Health Journalism 2014 in Denver. The stakes are high for readers or viewers who may be at risk for taking their own lives and for families who have lost a member, panelists said.

Reporters don’t do a bad job covering suicide, but their word choices can be subtly misleading, said Marian Betz, M.D., M.P.H., an emergency physician and suicide researcher at the University of Colorado School of Medicine.

“Suicide is not inevitable,” she said, nor is it “inexplicable.” She implored journalists to avoid using both words because 90 percent of people who die by suicide have psychiatric disorders that could have been treated.

Matt Vogl, M.P.H., deputy director of the University of Colorado Depression Center, echoed Betz’s message. At one point, he was in such extreme distress that he considered taking his own life. Fortunately, a bystander recognized that Vogl was in trouble and knew how to respond. He approached Vogl in a calm voice and talked him out of taking his own life.

“Suicide is not unpredictable,” Vogl said. “There are warning signs.” 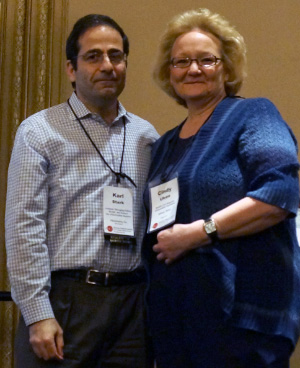 Health reporter Cindy Uken provided another angle. Since 2012, her coverage of soaring suicide rates in Montana has been boosted by fellowships from The California Endowment and The Carter Center, and this year she won a first-place Award for Excellence in Health Care Journalism for her series about suicide in The Billings Gazette in Montana.

“The number of older people who commit suicide really surprised me,” Uken said. In Montana, many people live hundreds of miles from mental health services and elders may find travel especially difficult. She sees early signs that telemedicine provisions of the Affordable Care Act (ACA) can help. This makes it possible for people in rural areas to interact with counselors online.

In Colorado, a telemedicine mental-health program run by the university is in beta testing, and Vogl is optimistic. “The elderly love it, and they’ve gotten used to the technology,” Vogl said. (Related: Exploring risk factors, rates of suicide in seniors)

Uken also discussed how her newspaper navigated the language of suicide. She and her editors chose to call suicide in Montana an “epidemic,” even though experts disagreed with the term. Otherwise they followed expert advice regarding word choices.

“We were careful, and we checked with mental health professionals before running anything, but we strongly felt ‘epidemic’ was the right word,” Uken said.

When I was reporting on complicated grief in Georgia, Irene McClatchey, Ph.D., an assistant professor of social work at Kennesaw State University, told me, “We never say ‘commit suicide’ anymore.”

“We say died by suicide, or death by suicide because ‘committed’ has a connotation that they did something illegal,” McClatchey said. Suicide is not illegal, but it carries a powerful social stigma.

Still, even mental health experts will occasionally slip in their phrasing. A source once accidentally used the phrase “commit suicide” during our conversation, but to quote her without context would have been a mistake. We both knew what she meant. Because I knew what language to avoid, I asked her to clarify and she said it differently.

The phrase “committed suicide” is an example of how reporters can affect the bereaved with their word choices. It’s not about being politically correct – it’s about improving the conversation. The word “commit” is the first hurdle.