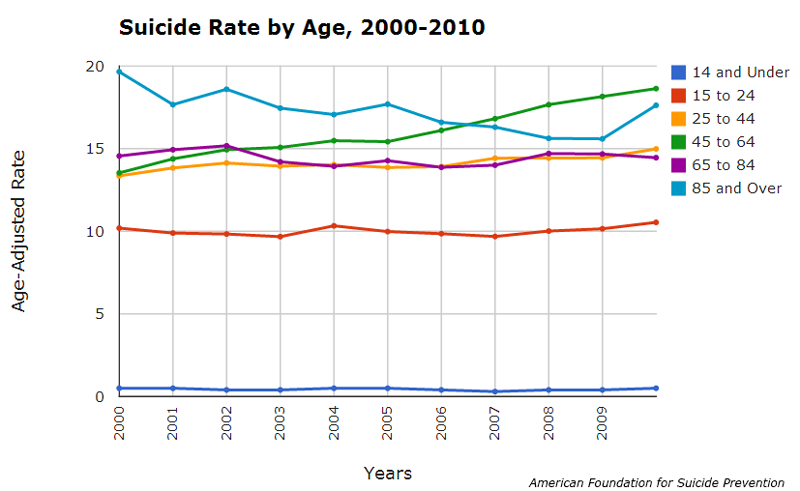 What are the most common risk factors for suicide in older adults?

The biggest one is major depression.

Major depression [in older adults] is difficult to recognize and diagnose, especially in the primary care setting where most diagnosis is going to be done. That’s because older people don’t come in with the classic symptoms [of major depression], related to things like schizophrenia or substance abuse disorder, which are fairly easy to recognize. They come in with somatic and functional complaints. They say: “I’m sick. I’m tired all the time. I’m not enjoying things I used to.”

So, how do potentially suicidal seniors get the “right” diagnosis?

To get an appropriate diagnosis, patients need a medical work-up – to see how their thyroid is doing, how their electrolytes are, what their vitamin D level looks like, and so on – but they need a psychological work-up, too, to find out why they are “sick” or “tired” of “not enjoying things.”

White males, especially those over the age of 70, have high suicide rates. Why?

The easy answer is that they own guns, so they have access to the tool that’s most often used in suicide.

Also, older men usually don’t have the social support network that women have, and after a spouse dies or after a certain point, whether from depression or bereavement or psychosis or diagnosis of a terminal illness, when they make up their mind to do it they are highly efficient at getting it done. … Studies that looked at the impact gun control legislation has had on death rates found that it didn’t change the murder rate much, but it had a significant impact on the suicide rate.

There’s another issue here, too. When an older person attempts suicide – especially someone in their 80s or 90s – even if they don’t die from the attempt, they are recovering from a physically weaker position. Because of that, they are much more likely to have “completion” of their attempt.

What about women. What’s their rate of suicide?

Elderly men have about twice the suicide completion rate as women. Not only do women attempt suicide less frequently, when they do attempt it they are also less successful … [because] they are more likely to attempt with pills, whereas men are likely to use guns.

Do you think, as the nation ages, that we are going to see an uptick in senior suicides. If so why? If not, why not?

Seniors [through Medicare] have access to health care … [And] the kind of late-in-life depression that can lead to suicide – once it’s recognized and diagnosed – is highly treatable, so I don’t see an access issue.

But a lot of what we are talking about boils down to how the primary care community understands what depression looks like [in older adults] and how primary care physicians are educated to recognize and treat it.

Right now there’s a movement to imbed mental health in primary care practice. It continues and grows; I think we may see less suicide in older adults.

For data, statistics and more information on senior suicide, go to:

1 thought on “Exploring risk factors, rates of suicide in seniors”