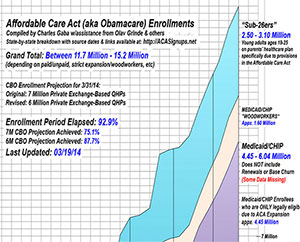 Here’s a fun – and helpful – site for tracking enrollment and trying to get a sense of where it’s heading.

Charles Gaba – aka the ACASignups guy – runs a great website called, of course, ACASignups.net. He isn’t doing the doing the elaborate modeling and forecasting of Nate Silver during campaigns – and he isn’t really comfortable with the comparisons. But it’s still the closest thing we have to a state-by-state real-time Affordable Care Act enrollment tracker.

Here’s the graph, which is part of the site but not the whole site. Here’s his nine-state track of how many people who signed up in an exchange plan have paid their premium – about 81 percent, though it’s not a full national picture.

Gaba is predicting 6.2 million exchange enrollments by March 31 – although he says that number can fluctuate day by day. If Covered California has another superglitch, it could fall, for instance. If another state suddenly surges, it will rise.

Gaba isn’t a statistician. He’s a web designer. He was profiled by Jason Millman in Wonkblog and I happened to be on a radio program with him this week. He says he gets his numbers through crowd sourcing: People send him releases and articles from the state exchanges, news coverage, and “nuggets” he finds in state reports. “I do a lot of Google searches myself,” he added.

The blog isn’t just numbers. It’s also smart observations and blog posts about specific states, and how they compare to other states. He also analyzes and critiques some of what’s being said out there that’s not so smart. He doesn’t think, for instance, that either the Massachusetts sign-up experience (which was bipartisan and not so toxic) or the Medicare drug benefit (a different demographic and different health status) are fabulous models for ACA enrollment.

So go play with the site. It’s useful for understanding state trends, hot spots, cold spots and – if you happen to be a health care editor – it might also be handy for figuring out how many reporters you need on call this weekend.