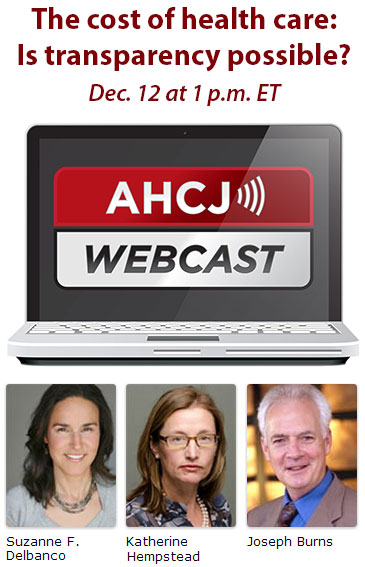 The counterargument to Durham’s point is that price transparency can foster competition, and thus may keep costs low. Modern Healthcare Editor Merrill Goozner made this argument over the weekend. “Competition over healthcare prices and quality is coming. Transparency and the radical redesign of health insurance benefits will be its handmaiden,” he wrote.

General Electric, a self-insured employer, distributes extensive data on health care costs and patient outcomes to its half million employees, family members and retirees, Goozner added. Using this information, the employees, family members, and retirees can compare prices and the quality of care physicians and hospitals deliver. Recently, GE moved its 500,000 plan members into a high-deductible health plan, meaning they will need more information about health care costs than they have had in the past.

Other employers are enrolling workers in high-deductible health plans and individuals are finding these plans attractive as well, according to an article posted Sunday night by Leslie Scism and Timothy W. Martin in The Wall Street Journal. But while the premiums for these plans are low, the overall costs may be high. Many consumers with modest incomes who are signing up for coverage under the Affordable Care Act are encountering deductibles so steep they may be unable to afford the portion of medical expenses that insurance doesn’t cover, Scism and Martin wrote.

During our one-hour webinar, the panel members will explore these and other compelling issues related to price transparency. The panel members are Suzanne Delbanco, Ph.D., executive director of the Catalyst for Payment Reform in San Francisco, and Katherine Hempstead, Ph.D., a senior program officer at the Robert Wood Johnson Foundation in Princeton, N.J.

2 thoughts on “Will price transparency drive up health care costs?”