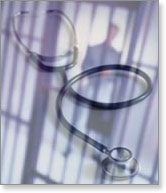 From time to time, the tabs in my web browser taunt me with the stories I’ve saved to read later. Fairly frequently, those stories have a theme, usually a subject that I’ve seen a spate of in-depth coverage on. Lately, those browser tabs have been filled with stories about health care in jails, a topic that also got some recent mentions on AHCJ’s electronic discussion list.

There are a lot of aspects to cover here: mental health, privatization, the money involved and the care decisions based on those budgets and, of course, the people affected by all of those decisions – inmates and their families. You might even think about reporting on the mental health of corrections officers. So, here are some stories I’ve been paying attention to and some resources to use as a jumping off point for your own reporting – which I hope you will send to me or post a link to in the comments.

In Modern Healthcare, Beth Kutscher writes about the privatization of jailhouse health care and critics’ questions about the quality of care and cost savings. Her story starts with a focus on Florida but points out that about 20 states have outsource all or part of their prison health care. Florida’s five-year contract for prison health care is $230 million. One expert “estimated that half of all state and local prisons and jails have outsourced healthcare services, and that these contracts are worth roughly $3 billion a year.”

Last month, ProPublica’s Christie Thompson compiled a list of reporting on mental illness in prisons that includes “the best deep-dive reporting on the mentally ill in U.S. prisons” and goes back to 2000.

In May, an organization called Community Alliance published an investigation into how the people with mental illness are treated in county jail in Fresno, Calif. The project was reported and written by journalism students Sam LoProto, Damian Marquez, Angel Moreno, Jacob Rayburn, Brianna Vaccari and Liana Whitehead and Max Arax, their professor from Fresno State University and a veteran journalist. They found the jail denies medication to inmates with mental illness. “Because they are not mentally competent to stand trial, they bounce back and forth in a perverse revolving door between the county jail and state mental hospitals, costing taxpayers even more money.”

Last month, The Fresno Bee published a 10-part series about the Fresno County Jail, finding that the jail cut back on psychiatric medicines as a cost-cutting effort but that the “policy has raised costs significantly in other areas. The project, reported by Marc Benjamin and Barbara Anderson, looks at the policy issues as well as the faces and the lives of those affected. One story addresses the privatization of jail health care.

Earlier this month, a Minneapolis Star Tribune investigation examined failures in Minnesota’s mental health system that have “left hundreds of psychiatric patients in limbo — many of them languishing in county jails, cycling through the criminal justice system and sinking deeper into dangerous psychoses.”

John Tuohy of The Indianapolis Star took a look at the aging prison population and the related health-care challenges that presents. He reports on “an uncommon hospice program at Wabash Valley Correctional Institute in Carlisle in which prisoners take care of other, terminally ill, inmates. Since it began three years ago, inmate volunteers have guided 50 dying convicts to their graves.”

Scott Thistle of the Maine Sun Journal reports that increasing violence at the state’s psychiatric hospital has been a catalyst for reform. The hospital’s patients include 92 people who have been declared to be “not criminally responsible” for alleged crimes.