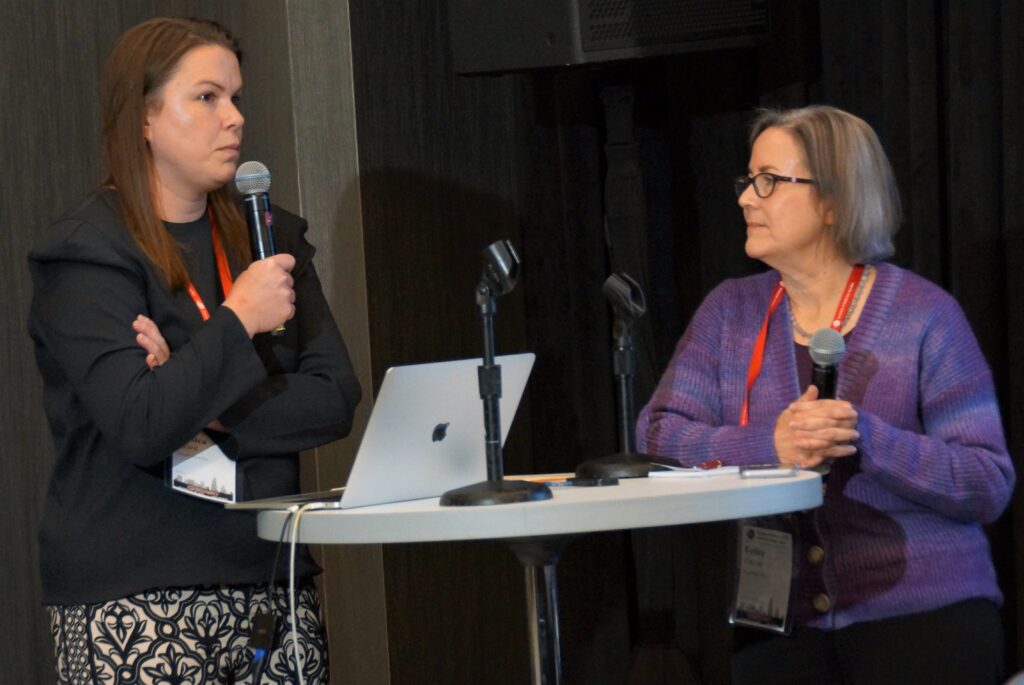 If reporters covered gun violence with greater empathy and context — including telling the story from the victims’ perspectives — instead of doing the more typical episodic reporting, it could reduce psychological harms of and potentially affect the prevalence of gun violence, said Jessica Beard, M.D., M.P.H., a trauma surgeon at Temple University Hospital.

Beard, also director of research for the Philadelphia Center for Gun Violence Reporting, gave an impassioned and research-rich lunch talk at the Reporting on Violence as a Public Health Issue: An AHCJ Summit Thursday, Oct. 27 in Chicago.

As a trauma surgeon at Philadelphia’s busiest hospital for firearm injuries, Beard described herself as” an expert on what bullets do to bodies.” She takes care of gunshot victims every night she works, sometimes five or more patients per shift.

“When you think about it, it’s sickening that my profession even has to exist, that I and my colleagues have to respond day in and day out to an entirely preventable disease,” Beard told attendees. “A disease that barely exists in other countries. A disease that plagues people already made most vulnerable by structural inequity. A disease that causes physical and emotional scars, for injured people, their families, and their communities that are lifelong, and that are carried across generations.”

Her experience treating dozens of gunshot victims every month — sometimes every week — led her to search for answers in the news about why gun violence was so prevalent in her community. Instead of answers, Beard found the standard nightly news “gun story” following such a common script that only a couple of words need to be switched out from one to the next. This type of episodic crime reporting — a brief news clip or written story reciting police-provided facts about the incident without any additional context or perspectives from victims or their families — is harmful, based on extensive research Beard cited.

“Somehow we need to work to help the public understand the realities of gun violence, to really understand them, including their root causes and evidence-based solutions, and have empathy for the victims,” Beard said. “If reporting could do this, [if it] could be empathetic and ethical, I truly think it would save lives.”

Beard didn’t shy away from provocative observations about gun violence coverage today, like this one during the Q&A: “We heard earlier today that journalists aren’t advocates, but when you’re only presenting the perspective of law enforcement, you’re a police advocate.” She also presented clear examples of the negative impact of harmful coverage while acknowledging that we’re still learning what better reporting would look like.

Reporters have successfully begun to change coverage of suicide — though it’s often been a slow change — following research that suggested best practices. Similar research on mass shootings has begun to move the needle toward more ethical, appropriate media coverage of those events, though there’s still a ways to go. But far less research exists on what empathetic, ethical reporting of day-to-day gun violence should look like, other than the fact that it shouldn’t be cookie-cutter episodic reporting that strips events of context and dehumanizes the victims.

Beard noted that her research into the epidemiology of gun violence in Philadelphia revealed that media trends don’t follow gun violence trends accurately. For example, gun violence peaks in the summer months but media coverage of gun violence slows during those months, indicating a lack of rhyme or reason as to when and why certain shootings are covered while others aren’t.

As in the rest of the country, gun violence intensified during the pandemic, particularly along lines of structural inequalities, Beard said.

“During COVID, we believe that largely unmitigated containment policies worsened structural inequities, and they disproportionately impacted people in our city, already at an extreme disadvantage, and they contributed to a situation where firearm violence increased in volume and intensity and impacted more Black women and children,” Beard said.

“Understand that this connection is key because it informs structural solutions for firearm violence that address its root causes, including investment in employment, public education, and social services along with improvements in the built environment, increased access to safe green spaces, and programs that interrupt the cycle of violence.”

These kinds of programs require broad public support, “and the news media have an important role to play in understanding firearm violence at every level, from educating the public to holding policy makers accountable,” Beard emphasized. “We know that media reports can influence public opinion and actions through framing and agenda setting, and they can help the public understand complex social problems.”

But episodic reporting most commonly seen in the news  “can lead audiences to blame victims and communities, and they can make people fearful,” Beard said, citing supportive research. A major part of the problem is inclusion of only law enforcement perspectives, which “can lead audiences to attribute unfounded efficacy to police responses to firearm violence,” Beard said.

Beard then asked a series of hypothetical questions that might provide ideas to reporters on better ways to cover gun violence:

Beard described research from gun violence victims she has conducted at the Philadelphia Center for Gun Violence Reporting, which also has extensive resources on better gun violence reporting. One qualitative study with gun violence victims found that none of them had been interviewed by a reporter, and the following themes emerged regarding coverage of the shootings they were in:

Beard acknowledged that research is sparse on best practices for day-to-day gun violence coverage, though we know what not to do. “From an evidence-based perspective, we know that episodic crime reporting is harmful, and our research has deepened understanding of these harms,” Beard said. “But the truth is that we don’t really know what the most effective and feasible alternative is.”

Beard hopes to see more journalists attempting to frame their coverage of gun violence through a public health lens instead of a crime and law enforcement lens. One way to start is to tell stories from victims’ perspectives, something Beard helped with in the audio documentary “Stronger Every Day” about one of Beard’s patients.

“For Walter, I had nothing left to give him to help him recover from his trauma other than to help him tell his story. Before this experience, he couldn’t even talk,” Beard said. “Now, through telling his story in his own way with the help of his mom, he’s been able to heal and recover, and the storytelling was a huge part of this journey.”

Listen to or read the full transcript of Beard’s talk and the subsequent Q&A with attendees here.