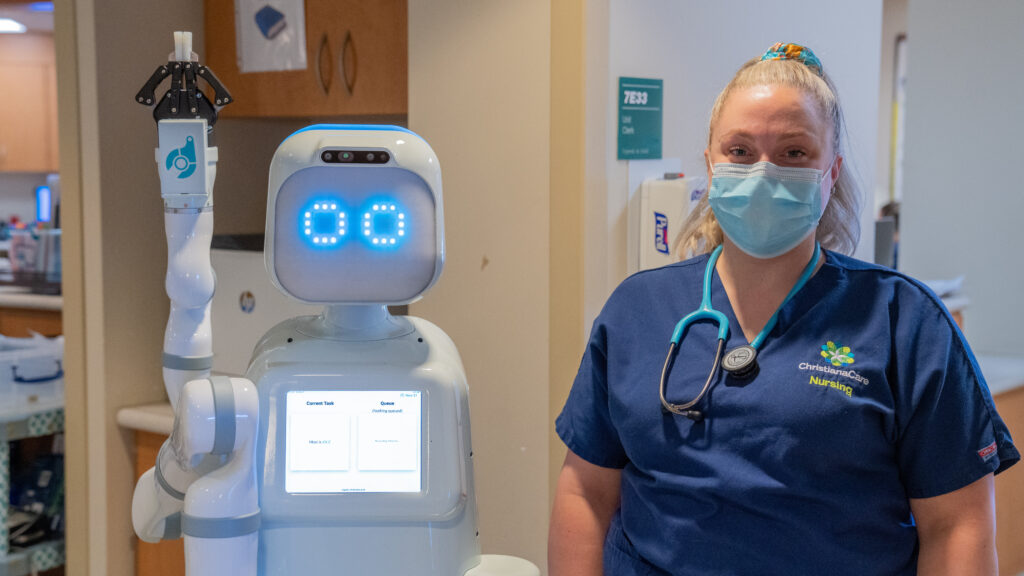 When Intermountain Healthcare’s call centers became overwhelmed in March 2020 with people asking about COVID-19 symptoms, the team turned to artificial intelligence, the Washington Post reported. Specifically, a chatbot — a computer program designed to simulate human conversation called Scout. The technology allowed people to describe their symptoms while the chatbot matched their responses to possible diagnoses to ask relevant follow-up questions or suggest actions for the patient to take.

It’s one of several technologies that were greatly accelerated during the pandemic and continue to be gaining ground in the face of an ongoing pandemic, an aging population, shrinking caregivers, health care worker burnout and resignations, and other factors.

Journalists can find interesting stories by investigating the various uses of chatbots, robots, and other virtual caregiver technologies being trialed or used by health systems, senior homes or others. But beyond the wow factor, it’s always good to maintain a critical eye to ask questions about costs, ease of use, accuracy, and if the intended audiences like them or find them helpful.

Tech to fight isolation, augment care among seniors and others

Some interventions are being marketed to senior communities. To help battle social isolation and support aging in place, the New York State Office for the Aging is delivering voice-operated smart devices to the homes of more than 800 older adults, Healthcare IT News reported. The technology, called ElliQ, is made specifically for older adults. Through voice commands or on-screen instructions, the device can engage in small talk or daily conversations, offer activities like sleep relaxation exercises, physical activity exercises, and medication reminders, and provide links to news and weather updates. Users also can employ the device for activities such as booking Uber rides, participating in video calls with loved ones, or playing trivia games.

An article in Nature from earlier this year looked at assistive robots that could help seniors. In one trial, a robot named Stevie helped lead entertainment activities such as bingo or sing-a-longs in retirement homes, freeing up staff to attend to residents’ needs. But it also has the potential to patrol corridors at night to ensure a resident isn’t wandering or assist with cleaning duties. The article also looked into personal-assistance robots that could help physically impaired adults with cleaning or personal care activities such as dressing, feeding and washing.

In other efforts, pharmacy benefits manager Magellan Rx Management collaborated with mPulse Mobile to address social isolation and loneliness in about 1,800 people with chronic or specialty health conditions across the country, according to another  Healthcare IT News article. In a pilot study, companies used a conversational artificial intelligence platform made by mPulse to conduct dialogues via text messages with participants on a variety of health-related topics. Throughout the trial, they sought to learn what barriers to care people were experiencing. The most engaged group were people in their 70s.

Robots in the hospital setting?

In May, ChristianaCare in Delaware announced it had some new hires to supplement its workforce: five robot assistants to help nurses and other hospital staff with time-intensive tasks to free them up for direct patient care, Healthcare IT News reported. Moxi, the collaborative robot, or “cobot,” can do automated tasks such as bringing supplies to patients based on nursing order requests, making rounds to deliver lab samples, or distributing medications not stocked on the floor. The robot design includes so-called “social intelligence” to help prevent it from bumping into people or objects in hallways. For fun, they also can wave and pose for selfies. The health system purchased these with a grant from the American Nurses Foundation; they are deployed to 11 inpatient units, partnering with more than 400 nurses, according to a ChristianaCare news release.

A story in Wired magazine noted that 15 such robots were operational in U.S. hospitals as of this past April, including two at Cedars-Sinai Medical Center in Los Angeles and two at Mary Washington Hospital in Fredericksburg, Va. These robots are used for tasks like transporting bed linens, medications, food and laboratory specimens from floor to floor. Another 60 were scheduled to deploy this year. The robots can be hailed by nurses from kiosks at nursing stations or sent a task via text message, Becker’s Health IT noted.

In a case study by the American Nurses Association of trials of Moxi in Texas hospitals, the majority of nurses said the robots gave them more time to talk with patients being discharged, saved them energy, and ensured patients had water when it was time to take medication. As an added bonus, they brought joy to patients and families.

Not all feedback was positive, however. Some nurses complained the robot had trouble maneuvering in cramped hallways or anticipating needs by accessing electronic health records. The manufacturer is working on integrating the device’s software with EHRs so robots can carry out some tasks without the need for provider input, according to the Becker’s Health IT article.

Some newer options for remote or virtual care monitoring were presented this spring at the Healthcare Information and Management Systems Society (HIMSS) Global Health Conference and Exhibition. One was a 3-D animated caregiver called Addison (to see how it works, click here), designed to engage with and help monitor health among seniors, chronically ill and pediatric patients via touchscreen devices placed throughout a home, according to a Healthcare IT News article.

Powered by Amazon Web Services and other technology, Addison is designed to help monitor patients’ health by providing voice-driven medication reminders, ensuring patients follow doctors’ treatment plans, and offering round-the-clock emergency response and telehealth services. It can lead patients through steps of recording vital signs like blood pressure and can share that with caregivers. For example, patients can select avatars of different ethnicities or genders to interact with and change the background environment from a bedroom to a kitchen.

Two other products presented at the HIMSS meeting include devices to provide virtual reality treatment rooms and other applications, allowing hospitals or patients at home to take telehealth for some conditions to the next level. One product transports patients to a virtual clinic for assessment and management of symptoms of stress, anxiety, depression, ADHD, or pain management, for example, by licensed therapists for drug-free treatment.

Another technology launched this year was a partnership between Amazon and Teladoc Health for voice-activated virtual care on Alexa-supported Echo devices, Healthcare IT News reported. As part of the service, a customer can say, “Alexa, I want to talk to a doctor,” to their device and get connected with a Teladoc call center. A Teladoc doctor will then return the call on the Echo device to conduct a virtual visit for non-emergency health needs.

And a telehealth platform called Connect2MyDoctor launched a 3-D/augmented reality (AR) module for patient education, according to Mobihealthnews.com. The web and mobile app-supported module, called cARe allows specialists to easily explain anatomical structures or physiological mechanisms using AR. A physician could pull up a 3-D model of the heart, for example, to describe a particular heart condition during a video call.