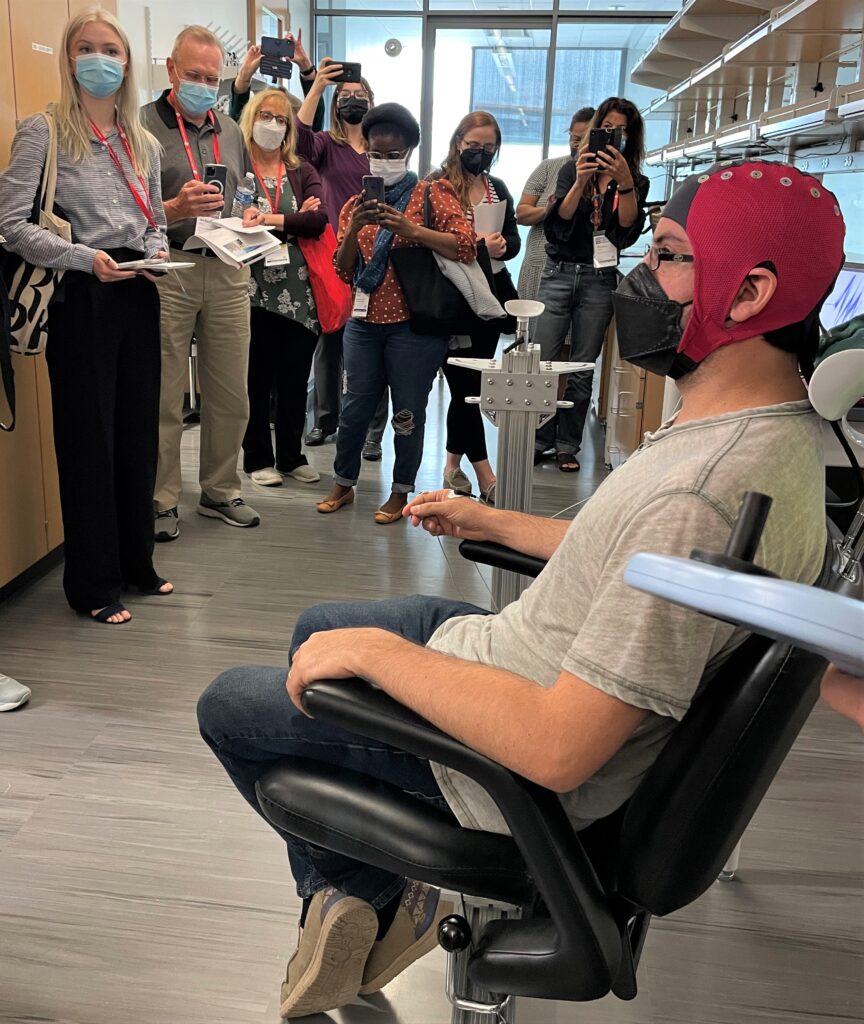 A student in Dr. José del R. Millán’s lab at the University of Texas at Austin, demonstrates a brain-computer interface project during one of the Health Journalism 2022 field trips. The cap is outfitted with electrodes. When an external magnet is placed near the cap, it produces an electric current that moves the student’s finger. The technology could potentially be harnessed toward recovery for stroke or other patients following brain injury.

Imagine if a computer or assistive technology could process the thoughts of a person paralyzed or lacking the ability to speak and respond. That’s the burgeoning field of brain-computer interfaces, a world that journalists covering Health IT may want to learn about and explore to further enhance their reporting.

A brain-computer interface (BCI) is a technology system that collects and interprets brain signals and transmits them to a connected machine that outputs the commands, panelists explained during “The electric brain: How technology can unite minds and machines” session, moderated by AHCJ Board President Felice Freyer at Health Journalism 2022. During the panel, researchers from Massachusetts, Texas and Michigan highlighted their work in BCIs as potential therapies for people with physical and/or speech limitations.

“When I see somebody in the neuro ICU who yesterday was able to walk and speak without any difficulty, but suddenly today is unable to move with cervical spinal cord injury, I’d like nothing more than to be able to tell that person, ‘I’m sorry this happened, but you’re going to be able to move again tomorrow,’” said Leigh Hochberg, M.D., Ph.D., a professor of engineering and senior lecturer in neurology with Brown University, Massachusetts General Hospital and the Providence VA Medical Center in New England.

That’s one of the goals of a project he directs called BrainGate, an effort funded by the Department of Veterans Affairs and the National Institutes of Health, among others, to develop BCI technologies to restore communication, mobility and independence for people with neurologic disease, injury or limb loss.

In clinical trials, Hochberg’s group has been implanting small, 4×4 millimeter microelectrode devices into the motor cortex of the brains of study participants. The devices contain 100 microelectrodes, each of which can record signals from one to three individual neurons and are connected by fine wires to small devices protruding from the top of the head. Those devices are then connected to computers that decode the signals, allowing a person to control the cursor on a computer screen, for example, just by thinking.

Some 30-35 people worldwide so far have had such devices implanted for this purpose, Hochberg said. In work since 2004 by the BrainGate multicenter team, participants used the devices successfully to operate a prosthetic limb, move a computer cursor, and direct a robotic arm, or type messages by spelling them out using a keyboard displayed on a computer screen. They also have used tablet computers to look up information or watch videos on YouTube.

A YouTube video demonstrated how one participant, paralyzed from the neck down, achieved a typing speed of 90 characters per minute, with 94% accuracy, using a BCI device that translated his mental handwriting into text. In further work with BCIs that transmit signals wirelessly, one man with a spinal cord injury was able to look at a computer screen and select music he wanted to hear.

Before the devices become mainstream, researchers need to understand more about brain signals, Hochberg said. They also need to be able to create devices that can control multiple commands, as well as improve speed, and become easy to use by laypeople.

At the University of Michigan, Jane Huggins, Ph.D., an associate research scientist and director of the Direct Brain Interface Laboratory, directs work developing electroencephalogram (EEG)-based BCIs for cognitive assessment and augmentative or alternative communication. Specifically, her team is studying brain events called P300, that are part of the decision-making process — the “a-ha” moment when the brain recognizes a rare event within a series of common events. P300 signals can be recorded from visual, auditory, or tactile stimuli, she said, adding that BCIs can be calibrated for each person.

For cognitive testing, Huggins’ team places people in front of a computer screen that displays a few images and tells the person to select one of the images, such as an apple. Sensors in an EEG cap worn by the person detect and analyze brain signals as labels by each picture flash. The system analyzes brain signals to identify which picture the person selected. Custom algorithms allow the team to wait while the person decides which picture matches the word.

For communication, the group is working on BCIs that would be compatible with a commercially available alternative communication device used by people with autism or other communication challenges. (Here are a few examples.) These devices are small tablet-like computers featuring pictures and words. Pushing on one of the buttons causes the device to say the name of the word aloud. The goal for the BCI is to have a person be able to select the same pictures by thought while the device speaks it aloud. A prototype has been developed and is in testing, Huggins said. Additional work needs to be done to make the calibration quicker and to minimize setup time for practical daily use.

“The biggest thing is that we need it to work for everyone who needs it with any disability everywhere they want to go,” she said.

And at the University of Texas at Austin, José del R. Millán, Ph.D., professor and chair of the Department of Electrical and Computer Engineering, and his team have been working on BCIs and brain-controlled robots.

One example is a telepresence robot (see some examples here), a laptop computer or monitor attached to a base on wheels, that can be directed by a person from their home, allowing someone to move through an environment without physically being in that environment. This technology could help people who are so severely disabled that they are confined to their homes or even their beds, Millán said.

In one study, nine participants with severe motor impairments from different countries in Europe, hundreds of kilometers away, were connected to Millán’s lab and learned to move the robot along defined pathways in a simulated environment using their brains. Their skill was equal to that of non-disabled people who participated in the study and operated the robots manually.

In other work, Millán’s team helped two people with tetraplegia (upper and lower body paralysis), following spinal cord injury, train for an international competition of brain-controlled technologies called the Cybathlon. The participants had to control an avatar in a virtual BCI race game. Over a series of weekly trainings for several months, the participants got faster and more accurate. One of them won the gold medal, and the other set a time record for the event. They consolidated skills in the brain, changing how their brains worked, Millán said, and potentially paving the way for new therapies to help them recover lost function.

Journalists interested in this avenue of research could find interesting stories by talking to researchers pursuing this line of work, spending time in a lab observing demonstrations of the technology, or interviewing patients testing the devices, and their caregivers.