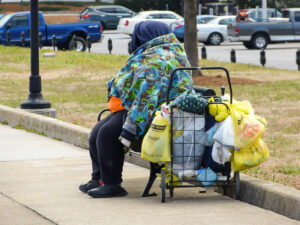 Recent years have seen an uptick in the nation’s count of homeless people, a population with a greater portion of people with mental illness than in the general population.

The Substance Abuse and Mental Health Services Administration’s still widely referred to 2011 estimate suggests that 26% of unsheltered persons had severe mental illness compared with roughly 5% of people with housing. And when the tally of homeless people with less debilitating mental disorders is added to that equation, the rate jumps as high as 45%.

“Mental Health Conservatorship Among Homeless People With Serious Mental Illness,” an observational study, analyzed hospital administration data for 795 patients, 18 and older, admitted involuntarily to one Los Angeles safety-net hospital between 2016 and 2018. While involuntarily committed patients comprised 6% of the sample population, they accounted for 41% of inpatient days spent hospitalized.

What’s more, researcher Kristin Choi, Ph.D., M.S., R.N., said, according to a Jan. 2 University of California, Los Angeles (UCLA) press release, “There are very few long-term housing options for people who are disabled by mental illness and in need of supportive housing in Los Angeles. When these individuals are stabilized and ready for a lower level of community-based care, there is no place for them to go.”

That lack of supportive housing helps drive those extended hospitalizations, according to Choi, a psychiatric nurse who teaches in UCLA’s School of Nursing and its Fielding School of Public Health. Choi led the nine-person research team, which included investigators from the UCLA Center for Social Medicine and Humanities and partnered with Gateways Hospital and Mental Health Center.

Before the pandemic, in raw numbers, California had more homeless people than any other state, though, proportionately, it ranked No. 4, after the District of Columbia, New York and Hawaii, respectively, according to this 2019 analysis. The National Alliance to End Homelessness’ “State of Homelessness: 2021 Edition” concluded that after falling for several years, homelessness rose nationwide during each of the last four years. The alliance’s count is based on January 2020 data.

Roughly 25% of all homeless people in the United States reside in California and New York.

The California analysis is one of the latest looks at the fraught issue of conservatorship of people with mental illness. Those court-ordered commitments are comparatively rare, partly because the legal requirements for obtaining them are rigorous and because there are fewer and fewer facilities providing in-patient psychiatric care.