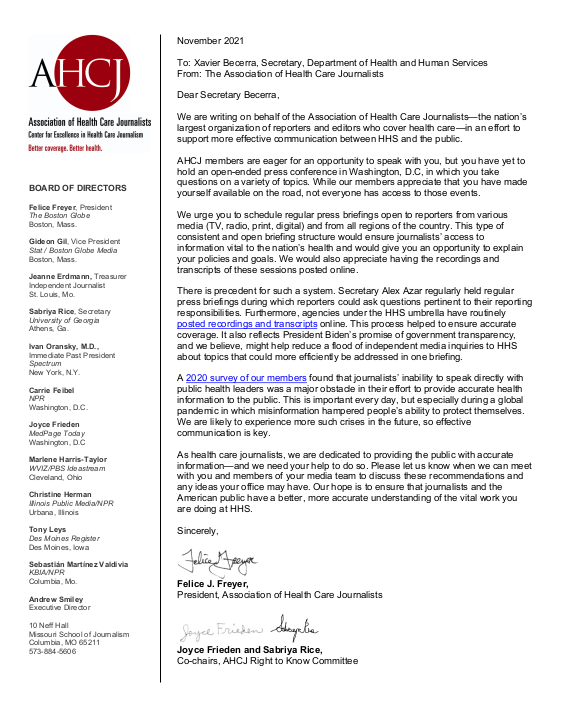 “We urge you to schedule regular press briefings open to reporters from various media (TV, radio, print, digital) and from all regions of the country,” AHCJ’s letter says. “This type of consistent and open briefing structure would ensure journalists’ access to information vital to the nation’s health and would give you an opportunity to explain your policies and goals.”

There is precedent for doing so, the letter points out: “Secretary Alex Azar regularly held press briefings during which reporters could ask questions pertinent to their reporting responsibilities. Furthermore, agencies under the HHS umbrella have routinely posted recordings and transcripts online. This process helped to ensure accurate coverage.”

AHCJ also requested a meeting with Becerra and his media team to discuss our recommendations.

The letter builds on an earlier appeal to President Biden, asking him to turn his attention to improving government transparency. That letter acknowledges Biden’s “deep commitment to democratic ideals” but notes that “officials shielded from questioning, records locked away, doors guarded and closed — these are reminiscent of autocracy. Openness restores trust.”

The Becerra letter advances the work of AHCJ’s Right to Know Committee, which has long fought for open access to experts and information at every level of government and in the private sector. Recently, the committee successfully lobbied for open access to White House briefings and surveyed members to identify the top obstacles to obtaining information from government entities.