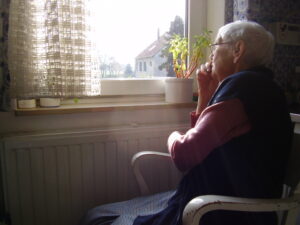 The pandemic’s assorted pressures have caused a spike in suicidal thoughts among subsets of people, including older Americans whose risk for suicidal ideation — and suicide itself — is linked to some of the particularities of aging.

According to a March 2021 analysis by geriatric researchers at Adelphi and Columbia Universities, 28% of U.S. adults who were at least 65 years old, or 14.7 million people, resided alone. That tally of older people living solo — and often enduring the gut punches of isolation and loneliness — only went up from there. Approximately 44% of women ages 75 and older lived alone.

There’s a kind of pile-on effect at play, researchers suggest, as societal and health problems circle in and out of each other. Social isolation can and does often worsen chronic illness, which disproportionately besets older people. The CDC calculates 85% of those age 65 and older have at least one chronic illness; 60% have two or more.

Several nonprofits and government agencies have rolled out efforts to raise awareness, especially amid COVID-19. But even preceding the pandemic, suicide among the elderly — the nation’s fast-growing age demographic — was being recognized as a major public health issue fueled partly by many older people feeling a loss of control over their finances, health, etc.

The National Council on Aging, which co-hosted the July 2021 “Understanding Social Isolation and its Impact on Older Adults” webinar and the September 2021 “Insights and Strategies for Reducing Suicide Among Older Adults” webinar, has several upcoming webinars on this topic including “Mental Health First Aid for Adults,” slated for Oct. 13.

Across the spectrum, observers, researchers and others have noted that the following raise the risks of suicide among the elderly: social isolation and loneliness, depression, and other mental health problems; substance use disorders, including addiction to prescribed medicines; disability; and persistent pain and chronic illness.