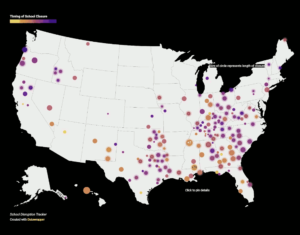 Source: K-12 School Opening Tracker from Burbio, a company that collects and publishes data on school closings and other community events. The map shows where schools are closed based on local media reports and website audits. Larger circles indicate longer closings. Reprinted with permission.

Now that schools have reopened, staying free from COVID-19 infections has become a challenge for teachers and students nationwide and has raised questions among journalists about whether schools can apply the lessons learned last year.

Recent reporting from Burbio, a company that collects and reports data on school closures from 1,200 U.S. districts, including the 200 largest, shows that by Sept. 6, COVID infections forced more than 1,400 in-person schools to close (an increase from 698 in the previous week) in 278 districts (an increase from 158 one week earlier) in 35 states (up from 25 the week previous).

“The shutdowns are hitting classrooms especially hard in the Deep South, where most schools were among the first to open, a possible warning of what’s to come as the rest of the nation’s students start school this month,” as Yoree Koh reported on Sept. 5 for The Wall Street Journal. In her article, Koh cited Burbio data.

Schools in Texas, for example, confirmed more than 50,000 coronavirus cases among students in just weeks, as Paul Flahive reported for Houston Public Media. “More than a dozen school districts have closed temporarily as a result of the disease, and Texas is a leader in child deaths from COVID-19 with 59 as of Sept. 3,” he wrote.

Last year, teachers, students and school administrators learned that among the best ways to curb the spread of infections are vaccinations, masks, social distancing and increased ventilation. Another effective way to limit infections is widespread COVID testing.

A report in July about school-based coronavirus testing from Mathematica, a health care consultant, and the Rockefeller Foundation, a philanthropic organization, did not get much coverage. But the lessons learned from that report and another from the RAND Corporation could help journalists understand how schools can use testing to control infections even while the Delta variant spreads quickly.

“Delta has changed the game fundamentally,” Mara Aspinall, an expert in diagnostic testing for the foundation, told me. “Last year children had some limited immunity to the original COVID strain, but that cloak of invincibility seems to have disappeared with Delta.”

“Testing can really pay off, if schools can be provided with that kind of support and coordination and guidance to make it happen,” said Divya Vohra, an epidemiologist at Mathematica who was the lead author on the report, Implementing Covid-19 Routine Testing in K-12 Schools: Lessons and Recommendations from Pilot Sites.

Routine testing can greatly reduce or eliminate the spread of the SARS-CoV-2 virus among students, the report showed. In high-risk settings, two types of testing were most effective: pooled molecular testing via polymerase chain reaction and repeated antigen testing.

Journalists should note, however, that such testing can lead to other concerns, setting up a tradeoff for teachers, parents and school administrators to consider. When test results show any children are infected, those students must be quarantined or sent home, raising the number of lost in-person school days, the report said.

In addition, COVID testing in schools is not only complex but anxiety-producing for teachers, students, staff and administrators, as schools in Missouri learned last year. “Delta’s spread has mired communities in emotional fights about how to safely send children — who are mostly unvaccinated — back to classrooms, particularly in states like Missouri, bedeviled by a high aversion to mask mandates and low vaccination rates,” as Rachana Pradhan reported for Kaiser Health News last month. “As classes begin, once again schools must weigh testing and other strategies to limit Covid’s spread — potentially without a deep supply of test kits available.”

In February, Patrick Wall, who covers education for NJ Spotlight News, reported that while testing can identify both symptomatic and asymptomatic infections, it’s costly and logistically complex.

In its Operational Strategy for K-12 Schools through Phased Prevention, the CDC says there could be legal and regulatory factors to consider with onsite school-based testing about who will prescribe, administer and pay for such testing and how results will be reported. “The benefits of school-based testing need to be weighed against the costs, inconvenience, and feasibility of such programs to both schools and families,” the CDC added.

What the research shows

In reporting for The Wall Street Journal on the Mathematica and Rockefeller report, Brianna Abbott noted that testing provides a layer of safety and can help staff and families feel more secure about returning to classrooms. “Such frequent, widespread testing helped many colleges and universities stay open during the fall semester,” she added.

For their report, researchers from Mathematica and the foundation worked from September 2020 through June to implement the K–12 Testing Protocol Demonstration Project in 335 schools in six places: Louisville, Ky.; Los Angeles; New Orleans; Tulsa, Okla.; the District of Columbia; and the state of Rhode Island.

Participation among students in the routine testing efforts ranged from a low of less than 1% to a high of 68%. To boost participation, the report recommended that schools make testing as accessible as possible by:

“Consistency is important because particularly with COVID testing, folks are feeling anxious and worried anyway, and change can erode trust,” Vohra said.

In addition to the lessons learned, the foundation and Mathematica have developed the Covid-19 K-12 School Testing Impact Estimator to help schools and public health agencies make decisions about when and how often to test in various settings.

In March, the RAND Corp. issued a report, COVID-19 Testing in K–12 Schools. Insights from Early Adopters, that described the landscape of testing as of December, summarized the benefits and costs of early adopters’ testing programs and made recommendations for school administrators tasked with implementing testing programs. The authors also reported on some of the various school testing programs they found, the challenges they had to overcome and the factors that made those efforts successful.