View all posts by Liz Seegert and Kerry Dooley Young → 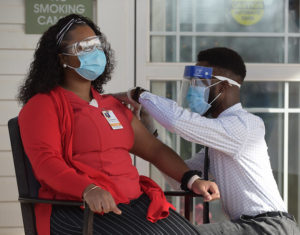 Is a new push by the Biden Ad­min­i­stra­tion to increase COVID-19 vaccinations among nursing home workers the right approach? While patient, resident and industry advocates are mostly supportive, others are alarmed by even the vague outline of the rule recently announced by the Centers for Medicare and Medicaid Services (CMS).

President Biden asked CMS to issue an emergency declaration on August 18 to mandate that workers at the nation’s more than 15,000 nursing homes that receive Medicare and Medicaid dollars get the COVID-19 vaccine or put the facility’s federal funding at risk.

Cases among nursing home residents have skyrocketed since late June with the spread of the delta variant, from a low of 319 cases to 2,696 cases on August 8. Many of the recent outbreaks have occurred in facilities with the lowest staff vaccination rates, CMS said.

An estimated 1.3 million nursing home workers are employed in facilities of all sizes across the U.S. Some 62% of nursing home staff are vaccinated, according to CMS, but in some states, as few as 44% have received the shots.

“Keeping nursing home residents and staff safe is our priority. The data are clear that higher levels of staff vaccination are linked to fewer outbreaks among residents, many of whom are at an increased risk of infection, hospitalization or death,” said CMS Administrator Chiquita Brooks-LaSure in a statement. “We will continue to work closely with our partners at the CDC, long-term care associations, unions, and other stakeholders to advance policies that keep residents and staff safe. As we advance these new requirements, we’ll work with nursing homes to address staff and resident concerns with compassion and by following the science.”

What the new mandate will look like, how vaccinations will be tracked or reported, or how potential penalties might be implemented remains unclear. For now, the only sources of information are statements from the president and a press release from CMS. There are no specific rules in place yet, although the agency expects to issue those in several weeks, it said.

Some long-term care advocates are thrilled that there’s finally a means to encourage more workers to protect both vulnerable residents and other workers.

“We are supportive of the requirement for people to be vaccinated. We think the order should have been broader — to encompass all health care settings, since individuals routinely transition between settings, as do staff,” said Lori Smetanka, executive director of the advocacy group The National Consumer Voice for Quality Long Term Care.

While there is concern that some staff may leave as a result of the mandates, it’s also possible that some who left jobs earlier in the pandemic in fear for their safety will return to the field, Smetanka said. “Generally speaking, these orders will make long-term care facilities safer places to both live and work.”

But nursing home operators and industry groups fear workers may quit or risk dismissal rather than get vaccinated, as has happened recently in several hospitals, including one in Houston. What will that do to the already thinly stretched staff — most of whom work for low pay and few, if any, benefits? Can states, many of which already face serious budget issues from the pandemic, make up the shortfall somehow?

Some states, including California, Massachusetts, Connecticut, New York, already have requirements in place for health workers, including nursing home workers, according to a Wall Street Journal story. But some governors cite “choice” in refusing to impose requirements. Meanwhile, the federal mandate, as well as state requirements, are already receiving pushback from nursing home operators, workers, and politicians, especially in red states like Mississippi.

What will happen if facilities don’t comply?

It’s hard to say whether facilities will stop accepting new patients if the government withholds Medicare or Medicaid payments. But Richard Mollot, executive director of the Long Term Care Community Coalition, a consumer advocacy organization, does not think current residents are in danger of losing care. “I don’t see nursing homes suddenly discharging residents,” he said in a telephone interview. “It’s more likely that this move will force them into compliance because the vast majority of their profits are from Medicare and Medicaid.”

Staffing ratios and infection control are long-standing problems in many facilities, he said. Some nursing homes report turnover rates as high as 97%, Mollot said, mostly due to low pay, lack of benefits and poor working conditions. “This mandate may temporarily exacerbate the problem in the short-term, but it’s the right thing to do for resident and worker safety.”

Not everyone thinks a big stick approach is the right move. Katie Smith Sloan, president and CEO of Leading Age, which represents more than 5,000 nonprofit aging services providers, said that while the organization agrees that all nursing home and other care workers should be vaccinated, threatening to withhold federal funds as a means to boost compliance is the wrong strategy.

“The vaccine is the best-proven protection. We all need everyone to be vaccinated while honoring exemptions for medical and religious reasons.” Sloan said in a statement. “To penalize nursing homes by withholding or withdrawing funding is not the right way to increase vaccination rates.”

Without Medicaid and Medicare funding, nursing homes cannot provide the quality care that our nation’s most vulnerable older adults need, Sloan said. The organization’s nursing home members, which operate on narrow margins in the best of times, depend on those funds alone to care for their residents, she said. “They cannot bear additional financial losses after more than a year of shouldering historic COVID-related costs.”

Mollot would actually like to see the new requirements go further to include home care agencies, assisted living, and other facilities that accept Medicare or Medicaid funding. “We don’t have the data to know how bad the problem is,” he said. “Who knows what’s really going on?”

When reporting on this issue, ask: