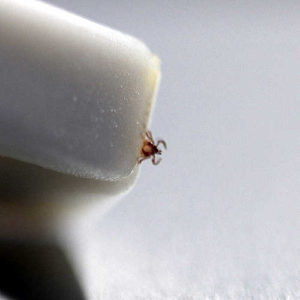 A feature story exploring how some ticks can cause people to develop an allergy to meat was one of the winners of AHCJ’s 2020 Awards for Excellence in Health Care Journalism. Its author, freelance journalist Bianca Nogrady, looked closely at this allergy — called Alpha-gal syndrome — which is on the rise in multiple countries, though the number of people who have developed it is unknown.

Nogrady spoke with AHCJ about the story and her advice to journalists covering this subject.

How did you find this story?

Back in 2008, my husband and I had some friends over for dinner. My friend, Peter, told us he was allergic to meat. That really piqued my curiosity because we are made of meat. So, I asked him more about it and he said it was related to being bitten by a tick. It just blew my mind that something like a tick bite could suddenly make you allergic to red meat. Peter suggested I talk to his immunologist, Dr. Sheryl van Nunen, and it turned that there was a cluster of these tick bite-related red meat allergy cases in Sydney’s northern beaches. I wrote about it for The Australian newspaper, [and it] was, to my knowledge, the first story written about this allergy anywhere in the world. It set me on a journalistic path of inquiry that would span 13 years, several continents, multiple scientific disciplines, and four national and international publications.

What do we now understand about the connection between tick bites and a red meat allergy?

It’s related to the sugar molecule galactose-α-1,3-galactose, or “alpha-gal,” which is found in mammalian meat but not primate — human — meat. For some reason, as yet still unclear, ticks produce alpha-gal, and it is one of the many bioactive compounds found in their saliva. When they bite a host, a small amount of alpha-gal is injected, and in the occasional unlucky individual, this can prime their immune system to continually react to that sugar molecule as if it were a threat. From then on, anytime that person eats meat, they have an allergic reaction.

What kept you sticking with this story for more than a decade?

This piece was so fun because it took me down the entomology side and vector biology and exploring what is in tick saliva. It took me into environmental science and climate change and how that might be resulting in a shift in these ticks’ habitat. It’s fascinating because it brings together so many aspects of science. They have found this tick allergy in Japan, Europe, Australia, the U.S., parts of Africa and South America. It’s a fabulous story that would make a great Netflix special where someone follows this whole scientific story. There won’t be an end to that story because there are still so many questions to be answered. It’s been a privilege to have witnessed the start of that scientific journey and to follow the researchers as they discover each new piece of the puzzle.

Do you think scientists will be able to figure out the increasing prevalence of food allergies because of this understanding about the connection between tick bites and red meat allergies?

I think the opportunity that comes from this to understand food allergies is extraordinary. It is a food allergy in a petri dish. You have someone who isn’t sensitized (meaning not allergic to red meat) and then you have this one incident, and that sets in motion a chain of events that leads to a severe food allergy. It’s pretty rare to understand where a food allergy began. Right now, there isn’t a clear understanding of how allergies that develop in early childhood get started. We can’t trace it back to anything and say this is where it began, immunologically. And here, we have an opportunity to explore that first event and look at what is happening immunologically and how it leads to the development of an allergy.

Don’t dumb down the science. Respect the intelligence of your audience. People will get it if you walk them through it. Understand it well enough so you can explain it to your grandma or to your kids, but don’t be afraid to get into the details.

What is your approach as a journalist to get up to speed on scientific topics?

Start interviewing people. It’s where I learn the most. Every journalist works differently, but I use interviews as a starting point. The interviews are the foundation of the story. They are the experts, and they know the landscape and know what is important versus what is the noise. So, I start by talking to experts and understanding the picture, and then I go back and look for the research papers. Then, I follow those research trails. I use my interviews to understand what I am researching and what I need to cover. You could read yourself to death and still have no sense of what the angles are. There are some great online resources about alpha-gal syndrome. One of the most authoritative is the Mayo Clinic. In the U.S., there are patient groups on social media like FaceBook. There are research groups and individuals, like Professor Scott Commins and Professor Sheryl van Nunen, and if you look for research they’re publishing, you can keep track of what’s happening.

Where do you expect to be following this story next?

The next big thing is when scientists work out how to treat it because that will lay some foundations for how to treat other food allergies. Right now, the only treatment is prevention and early intervention. One theory is that there is a window after initial exposure from the tick bite where, if you limit your red meat intake and limit exposure to further tick bites, then the reaction might subside, and you could possibly avoid full-blown allergy. But that’s just a theory. Tick bite prevention campaigns are based on the idea that perhaps repeat exposure to the alpha-gal in the tick saliva might lock in the immune response.