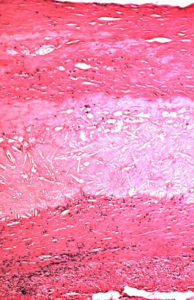 While deaths from COVID-19 have naturally been a major focus over the past 18 months, cardiovascular disease (CVD) remains a significant and growing problem. Even during the pandemic, heart disease was the leading cause of death in 2020. More than 868,000 Americans die of heart disease or stroke every year. That’s one-third of all deaths.

Nearly a quarter of men (23%) and 14% of women between ages 60 and 79 have some type of heart disease and millions more are at risk due to hypertension, high cholesterol, obesity, family history, or other risk factors.

The pandemic may have even worsened rates of CVD, as many people avoided or delayed routine health care and management of chronic conditions. For those over 80, the rate of CVD jumps to 36% for men and 21% for women. As the population of older adults in the U.S. increases to a projected 22% in 2050, heart disease will continue to impact mortality and morbidity rates. So it makes sense to become familiar with one of the leading types of heart disease, atherosclerosis.

As a new AHCJ tip sheet notes, atherosclerosis is a form of CVD that begins early in life and gets progressively worse as we age. Almost everyone is affected by the time they’re 65, according to cardiology researchers. Fun fact: atherosclerosis was first described in 1575, but there is evidence that the condition occurred in people more than 5,000 years ago. It is one of those silent killers, which often presents no signs or symptoms until it severely narrows or blocks an artery, leading to a heart attack or stroke, according to the National Heart, Lung and Blood Institute (NHLBI).

Cardiovascular diseases take a steep economic toll, costing our health care system $214 billion per year and causing $138 billion in lost productivity on the job, according to the CDC. CVD is already America’s costliest disease and costs are expected to skyrocket to $1.1 trillion by 2035, a report from the American Heart Association projects. They predict direct and indirect costs will triple among those over 80 and double among those over 65 within 15 years.

Cardiovascular disease, including atherosclerosis, is largely preventable through lifelong heart-healthy habits like exercising, abstaining from smoking, getting regular screenings for related chronic conditions and having a nutritious, balanced diet. However, access to care, socioeconomic disparities, and sedentary lifestyles remain an ongoing challenge for many of those at risk, especially older poor and minority populations.