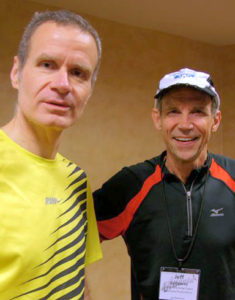 Monday will be my final day as AHCJ’s director of education, as announced some weeks ago. I plan to help my able successor, Katherine Reed, but my time for day-to-day operations will close.

My retirement marks 20 years of work in the nonprofit world in bringing resources and training to journalists. Before that, I spent 21 years in the newspaper business, covering or editing almost everything newspapers cover.

During my newspaper career, I had a near-deadly stroke that gave me some perspective on what’s important: other people.

My background is small-town Arkansas. I’m the son of a schoolteacher and a telephone company worker. I didn’t comprehend until years later how fortunate I was to have a rather idyllic childhood. I have strong feelings about cornbread recipes and a passion for distance running. To this day, my wife Laura and I go back to our hometown, try to spoil our grandsons there and drive by the house where I grew up.

The closest thing to a mantra for me was displayed on my AHCJ office wall, on cross-stitch art made by my mother: “Always behave like a duck — keep calm and unruffled on the surface, but paddle like the devil underneath.”

My 12 years with AHCJ have been quite a ride. Among other places, I’ve visited a laboratory full of live mosquitoes and a government library designed to protect vital books from nuclear attack. More importantly, I’ve met a galaxy of incredibly smart and talented colleagues and fellow staffers, gifted health experts, and those countless people behind the scenes who have helped our events take shape.

I’m a big fan, as many friends know, of a British television show. The main character lives and travels in a structure that appears small on the outside but is enormous on the inside. “It’s bigger on the inside” is one of the show’s catchphrases.

AHCJ, too, appears small on the outside with a full-time staff of just eight and modest offices.

Consider, though, the more than 1,500 AHCJ members and thousands of journalists, speakers, hosts, sponsors and more who’ve attended our conferences, workshops, fellowships and webcasts. Consider the hundreds who’ve written for the organization.

AHCJ is, as the catchphrase goes, bigger on the inside.