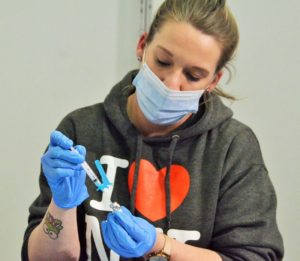 In a deep-dive story for the Center for Public Integrity, a reporting team looked at the risk of contracting the virus among families living together — households that can include elders, essential workers and school-age children — and the gap by states prioritizing those households for vaccination. Their investigation showed that COVID-19 cases were disproportionately higher in counties with large concentrations of multigenerational households.

These households often are comprised of people of color or immigrants, many of whom tend to have less access to health insurance and medical care, as well as underlying conditions making them more vulnerable to catching the virus and become sicker when that happens, according to the package written by April Simpson and Susan Ferris.

As Simpson, Ferris and editor McNelly Torres explain in a new AHCJ How I Did It, a story like this needed data to support the investigation. News developer Pratheek Rebala crunched the data to see how common multigenerational households are across the U.S. But first, everyone had to be on the same page on how to define “multigenerational.” The team agreed that term could include parents and adult children, grandparents and grandchildren, and other combinations of families residing in the same home.

Using this guideline, it turns out that nearly one-fifth of households (18%) have at least two (and often more) generations living under the same roof. As Simpson and Ferris explained, “This finding was important because experts have found that virus spread within these households has contributed to COVID-19 racial disparities. Yet states largely prioritized people for vaccinations based on age and occupation.”

Even after states lowered the eligibility age for the vaccine, it didn’t necessarily help everyone living in the household. Younger people of color were still at higher risk of contracting COVID-19 than their white counterparts, with the reporters pointing out:

“Built into the 75-and-up age group is another racial disparity: roughly 80% are white. One major reason: Blacks and Latinos typically die younger than white people because of a disproportionate lack of access to health care.”

To help local reporters track these cases, data fellow Taylor Johnston created an interactive map so journalists could better visualize the rate of local multigenerational households. As a result, this story is an excellent starting point for anyone looking into local issues of racial disparities, vaccination rates, risk and other challenges of those who may not always be visible on the radar of your of county or state health department.