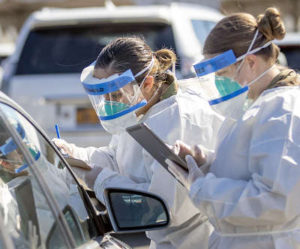 The pandemic laid bare the woeful underfunding of the nation’s public health system as states and localities continue to struggle to provide timely testing, contact tracing, clear guidance to the public and reach vulnerable and underserved communities.

Though the pace of vaccinations has picked up considerably in the past month, the paucity of staff and resources at state and local health departments has meant that many public health departments could not get vaccines into the arms of the public as quickly as hoped, given the continued spread of SARS-CoV-2, the virus that causes COVID-19.

“We’re seeing the consequences now of a complete and utter failure to ensure we have a full and robust vaccination system,” Dr. Jeff Duchin, head of public health in Seattle and King County, Washington, told the Pew Charitable Trusts.

Congress has jumped in to try to solve the underfunding problem through the American Rescue Plan, a $1.9 trillion bill to shore up the economy with checks to individuals and businesses, as well as funding to numerous social programs including childcare, disaster relief, education, healthcare, housing, nutrition assistance, transportation, water and utility assistance and workforce development.

See this comprehensive analysis of the bill by Washington D.C law and lobbying firm Holland & Knight.

Journalists now have a great opportunity to follow the money and learn what state and local health departments are doing with all the new financing, as the Tribune-Review noted in an April 4 editorial.

“It’s wonderful that new federal funding is coming in, but you can’t just hire new people on a dime,” Jeffrey Levi, professor of health policy and management at the Milken Institute School of Public Health at George Washington University, told Pew.

Public health experts say the amount of new funding could have a transformative effect on public health departments and help solve long-standing problems, such as a lack of modern information systems (some health departments were stuck using fax machines during the pandemic), but the potential exists for money to be wasted. So, it’s an area ripe for reporting.

To get started, here are a few resources:

See if anything from your community is listed.