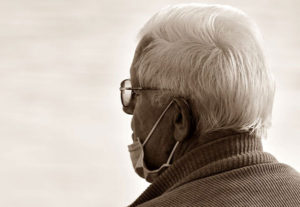 Racial disparities are glaringly obvious when examining COVID-19 caseloads, hospitalizations and deaths. A new study in JAMA Open looks at how these inequalities in the general population may also be associated with differences in mortality among nursing home residents with a COVID-19 infection.

Even before the pandemic, Black individuals were more likely to be admitted to lower-quality nursing homes than whites, according to the researchers. These facilities tend to have lower staff-to-resident ratios, more documented deficiencies, and a more significant proportion of Medicaid beneficiaries. While disparities in COVID-19 deaths might be expected, “research to date has revealed little association between nursing home quality ratings and COVID-19 cases and deaths.”

Those with a larger proportion of non-white residents may also be susceptible to a higher death rate for other reasons. For example, they may be in larger institutions, resulting in more opportunities to transmit the virus. Also, there may be more community spread in non-white neighborhoods, leading to increased transmission in these facilities. Community spread is a factor in cases and deaths in nursing homes, as this article from the Middletown Press in Connecticut described.

Researchers looked at cases and deaths self-reported by nursing homes in a portion of 2020, beginning between Jan. 1 and May 24 and ending on Sept. 13. Since May 24, all nursing homes with Medicaid and Medicare certification are required to submit weekly reports to the Centers for Disease Control and Prevention. They used the Nursing Home COVID-19 Public File from the Centers for Medicare and Medicaid Services (CMS) with COVID-19 cases from the USAFacts website, the LTCfocus database, and Nursing Home Compare archives. The mean age of residents was 79.5. Researchers measured nursing home racial composition as the proportion of non-Hispanic white residents in the LTCfocus database, grouped into five racial composition quintiles across the sample.

The resulting analysis shows as of Sept. 13, 2020, 334,844 COVID-19 cases and 51,606 COVID-19–associated deaths were reported among residents, with a mean of 3.9 deaths per facility. Deaths among nursing home residents with COVID-19 infection were higher in facilities that had low proportions (<60%) of white residents compared with those that had high proportions (>97%) of white residents. Overall, nursing homes with higher non-white populations reported an unadjusted mean of 37.1 cases during this period compared with 12.3 cases in facilities with mostly white residents.

“The current pandemic has been described as a perfect storm for nursing home residents because of the worse health of this population and the realities of living in congregate settings that may have inadequate resources for testing and personal protective equipment in addition to staffing shortages,” researchers concluded. “Although these factors have implications for all nursing homes, our findings suggest that facilities with higher proportions of non-white residents are experiencing worse outcomes than those with higher proportions of white residents.”

Researchers noted several limitations to their study, including lack of detailed data on race and ethnicity; that data was self-reported. (There have been numerous discrepancies between CMS and local and state data, as NBC San Diego reported.) Also, cases and deaths are likely underreported since mandatory reporting only began in May.

However, even with these caveats, the data showed stark differences between cases and deaths in facilities located in non-white and majority-white areas. The authors noted that as vaccination proceeds, it is important for policymakers to consider existing inequities to ensure that the process of vaccine distribution includes particular efforts to reach communities of color.

Journalists may want to compare case and death rates among facilities in their communities. Among the questions to consider: