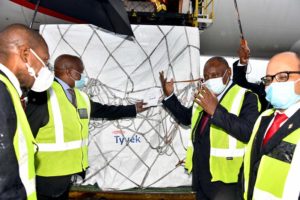 The World Health Organization (WHO) currently estimates that ending the COVID-19 pandemic will require at least 70% of the world’s 7.8 billion population to have immunity to the SARS-CoV-2 virus, which may take until 2023 or longer given the logistical challenges of getting a vaccine from manufacturing plants into people’s arms around the world.

Wealthier nations have contracted with vaccine makers to buy more than half of the world’s COVID-19 vaccine supply of 8.2 billion doses as of mid-February, while less affluent countries have purchased only about 16 percent of the supply, according to Duke University’s Global Health Innovation Center. Just 10 countries had administered 75 percent of all vaccine doses, and 130 countries hadn’t administered any doses, the WHO said.

“Right now, it is the law of the jungle,” Barry Bloom, professor of public health, immunology and infectious diseases at Harvard University’s T.H. Chan School of Public Health, told Axios about the race by countries to obtain vaccines for their populations.

This gap showcases the enormous challenge in ensuring global access to COVID vaccines. The story is ripe for coverage by health care reporters in the coming months. Americans won’t be able to return to pre-pandemic life unless there is better global supply and distribution of the vaccine.

“Until everyone is safe, no one is safe,” Ellen Johnson Sirleaf, Liberia’s former president, told NPR.

The WHO, in conjunction with the Global Vaccine Alliance and the Coalition for Epidemic Preparedness, is working to fill the gap between rich and poorer countries with the creation of COVAX — COVID-19 Vaccines Global Access Facility.

President Biden pledged last month that the U.S. would donate $2 billion to COVAX to help speed up the purchase and delivery of COVID-19 vaccines to more than 100 middle and low-income countries. He pledged an additional $2 billion over the next two years as part of an international commitment to supporting global health measures. The Biden administration’s funding to COVAX is separate from funds spent in the U.S. to vaccinate Americans.

The pledge is a reversal from the previous administration. Donald Trump, Biden’s predecessor, refused to join COVAX and has begun withdrawing the U.S. from WHO, the public health arm of the United Nations. On his first day in office, Biden halted the withdrawal and restored U.S. support for the agency.

Public health officials say the world’s population must get vaccinated as soon as possible to slow the development of SARS-CoV-2 variants that were first identified in other countries and now are circulating in the U.S. The more people who continue to be infected globally, the more likely the virus will develop mutations that can evade vaccines and treatments, according to Dr. Anthony Fauci, director of the National Institute of Allergy and Infectious Diseases.

“Bottom line: We have to get the entire world vaccinated, not just our own country,” Fauci told the Journal of the American Medical Association on Feb. 9.

If journalists want to write about when life will return to normal, stay on top of the global rollout of the vaccine — not just what’s happening inside the U.S. Click here for our new tip sheet on the topic.