Given all the concern about the failure of rural hospitals, it may seem counterintuitive that some hospitals in rural America may need to close. In multipart series for the Atlanta Journal-Constitution, investigative news reporter Yamil Berard found last year that some rural hospitals in Georgia had serious deficiencies.

In her research, Berard also learned that some rural hospitals matter more than others. That finding may challenge conventional wisdom that rural areas need all hospitals, particularly since so many have closed in recent years and many hospitals have struggled since the COVID-19 pandemic began early last year. Last year, Andy Miller reported for Georgia Health News that seven of the state’s rural hospitals had closed since 2010, though some reopened as smaller facilities offering lower levels of service.

In a new How I Did It piece for AHCJ, Berard explains how she used reports from the Electronic Municipal Market Access. EMMA is the municipal bond clearinghouse that collects debt and financial data for hospitals that issue bonds.

It also has data on the legal challenges hospitals face. “I learned, for example, of a $23 million claim against a rural hospital that if affirmed would almost guarantee the hospital’s demise,” she reported.

Another useful resource was Cost Report Data Resources, LLC, which has data on hospital occupancy rates, payer mix and federal payments. The company provides that data free to the media, she said.

Berard found that, in many cases, administrators at the hospitals in greatest peril made poor decisions that led to their demise. “One hospital went on a building spree to attract more patients, but the patients never showed up because many in that facility’s service area were moving out of town,” she wrote. “Another invested in postpartum and delivery services when most women having babies were willing to drive to a larger hospital nearby that had better equipment and more skilled staff to ensure the safe delivery of babies and the health of mothers.”

Notably, Berard found hospital consultants who agreed with her thesis that some rural hospitals matter more than others. “Many rural advocates praised our work as sobering information that needed to get out to the public,” she reported. In response to her questions, hospital administrators said they were doing their best with limited resources.

Another strength of Berard’s work is her review of state and federal efforts to strengthen rural health care. “In my research, I found that the federal government hadn’t done much to devise any long-term solutions and that its formulas for Medicare and Medicaid reimbursement had largely contributed to the inefficiency and wastefulness that caused many hospitals to close,” she wrote. 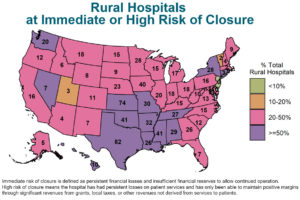 A report in September from the Center for Healthcare Quality and Payment Reform (CHQPR) confirmed some of what Berard found about federal efforts to strengthen rural hospitals. In that report, Saving Rural Hospitals and Strengthening Rural Healthcare, CHQPR CEO Harold D. Miller estimated that more than 800 such hospitals (40% of the nation’s rural hospitals) are at risk of closing in the near future. More than 300 hospitals were at high risk of closing due to low financial reserves or increased dependence on local taxes or state grants, Miller noted.

“Most of these are small rural hospitals that serve as the primary source of health care services for many of the nation’s agricultural and energy-producing communities,” he wrote.