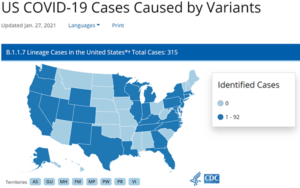 There is a growing amount of concern in the U.S. about SARS-CoV-2 variants and the possibility they may diminish the effectiveness of COVID-19 vaccines.

The story is evolving. On Jan. 25, the Minnesota Department of Health said a variant, first found in Brazil, was found in a patient in Minnesota. On Jan. 28, the CDC announced that a variant, first found in South Africa, was found in South Carolina.  Both variants have shown a potential to reduce vaccine effectiveness. [See this piece by AHCJ’s Tara Haelle on understanding the nuances of vaccine efficacy.]

So here are a few resources to help with your reporting:

For background: All viruses mutate naturally. This is common and expected. Reporters began writing about mutations of the SARS-CoV-2 virus in July 2020, just a few months after the pandemic was declared. Now the virus has infected around 100 million globally, providing lots of opportunity for the virus to learn to evade humans’ immune systems.

This Vox story does a great job explaining why it seems like there is a sudden explosion in virus variants.

The U.S. Centers for Disease Control and Prevention is stepping up its monitoring of the virus variants, but it is way behind because it’s didn’t create a national monitoring network for SARS-CoV-2 variants during the Trump administration. The agency needs more funding from Congress to boost surveillance, CDC’s new director Rochelle Walensky said on Jan. 27, at the first media briefing of President Biden’s COVID-19 Response Team. Here is a chart of where variants are located across the country, according to the CDC. This chart is updated by 7 p.m. on Mondays, Wednesdays and Fridays.

“We [already] have a system (of virus surveillance in the U.S. because) we have a network for sequencing the influenza strain,” Mirella Salvatore, M.D., Weill Cornell Medicine assistant professor of medicine and populations health, said during a Jan. 22 media briefing hosted by the Infectious Diseases Society of America. “We just didn’t do it for COVID because we were in the avalanche of cases and maybe denial of the danger… [but] the ability exists. We just need the funding and the organization to sequence this in the states. We need to know what variants are circulating in the population.”

The 45-minute IDSA media briefing is worth watching. The physicians who participated in the briefing, Salvatore and Kathryn Edwards, M.D., professor of pediatrics at Vanderbilt University School of Medicine, have offered to be resources to the media.

To find other experts on this topic, journalist Marla Broadfoot, who has a doctorate in genetics and molecular biology, suggested both looking up these 11 experts, as well as following them on Twitter: