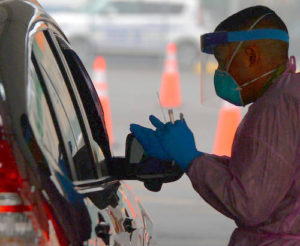 Scientists now have a much better idea of how people become infected with SARS-CoV-2, the virus that causes COVID-19.

But public health guidelines for how to prevent spread have been confusing. There have been mixed messages provided by federal, state and local government leaders, which has left many people hungry for information about how to assess their risks, as businesses reopen and summer vacation plans are looming.

To help fill the information gap, Dr. Erin Bromage, a University of Massachusetts, Dartmouth associate biology professor who has spent much of his career utilizing infection control measures in his animal research work, created a blog called “COVID-19 Musings.”

The blog, which draws upon his scientific and personal knowledge, provides a useful perspective for people to try to analyze their risks. He also is advising states, cities, health care providers and local businesses on how to navigate interpersonal activities safely.

“I had the skill set to be able to deal with a respiratory infection that was sweeping the globe, but most other people didn’t, and what I found was that I was able to distill some of my training with the science that was coming out to give people actionable plans,” he said during an AHCJ webcast on June. 17. (Hear the recorded event here.)

Based on the evidence so far, the consensus among scientists is that the virus spreads primarily through respiratory droplets and aerosols particles emitted when people talk, cough, sneeze, sing or yell. There is less evidence that virus particles remain on surfaces for long enough and in amounts large enough to lead to infection.

“When we’re indoors, the conversations are closer, and those respiratory droplets build up in the air, so (it’s like you are) inside a box,” Bromage said. “The box fills up with your respiratory droplets and the more people you have in that box, … the more the chance you’ve got of someone being infected.”

Being indoors, next to a window, or being in a space where the air is continuously circulated lowers the risk because the virus particles become dispersed. Being outdoors and remaining six feet apart from people, as well as wearing a mask, reduces the risk of infection even further, he said.

For more on the science of transmission of COVID-19, see Bromage’s post: “The Risks ― Know Them ― Avoid Them.”

During the webcast, Bromage assessed the risks to people for infection from groceries, mail, Amazon packages, indoor dining, outdoor dining, gyms, yoga and Pilates studios, hair salons, flying on an airplane, beaches, pools and participating in a protest.

He urged reporters to begin writing about the need for people to return to visiting their physicians for primary and specialty care and to dentists for check-ups. Childhood vaccinations have dropped, and there are rising concerns that diseases other than COVID-19 could emerge because of the reduction in routine vaccinations.

“I’m really going to start focusing on this,” Bromage said. “We’ve got PPE (personal protective equipment) under control, and doctors know infection control well. Many people have put off appointments, and it’s time to get back to the doctor’s office. It is safe.”

One of the thorniest questions that scientists continue to debate is the safety of students returning to school in the fall, said Bromage, since school systems should expect to see infections emerge during the school year. Any schools planning to reopen in the fall should have contingency plans that include resuming to online teaching if needed.

“I’m really struggling with putting out advice on kids … it’s just nothing is clear,” he said, noting that while kids tend not to get as sick as adults, there is a lot of uncertainty about exactly how the virus can make children sick and the extent to which they can be spreaders of the disease.

“I cannot see how you open schools without infections,” he said.

Bromage also discussed the difference between face masks and face shields, when they could be helpful and gave the name of a mask maker that he believes makes effective cloth masks. He provided a list of experts reporters can trust and should turn to for getting perspective on COVID-19.