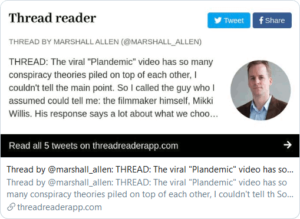 As misinformation about COVID-19 continues to proliferate in the digital world, journalists are challenged more than ever to debunk falsehoods and get accurate information to the public.

But how do journalists point out baseless information, without creating a “backfire effect” — essentially amplifying the falsehood or giving it legitimacy by writing about it?

Marshall Allen, an investigative reporter at ProPublica, recently demonstrated one strategy for helping people determine whether a story or a video is real or false. Instead of refuting each false point, Allen deployed his investigative skills to help readers ask questions about the conspiracy video “Plandemic” and understand what a documentary in pursuit of real health and medical news would look like.

“My goal wasn’t to enter into the debate about the validity of the video,” Allen said in an AHCJ “How I Did It” Q&A about the project.” I thought that (approach) would create more polarization, so instead, I linked to PolitiFact, which has (fact-checked) the specific claims in the video… What I wanted to do was something more broad. … How do we spot a conspiracy theory? … I was trying to help some people see (how to spot) what is credible and what isn’t.”

Allen offered readers some agency by offering criteria in the form of a checklist they can use, such as asking:

This approach was effective with some, who seemed willing to reconsider the validity of the video, he said.

“After I posted my story, some of the same people who wrote on Facebook (about the video) wrote to me and said: “I appreciate it. That is helpful,” Allen said.

The extent that bad actors are working to manipulate technology and post incorrect health and medical information about COVID-19 shows how important it is for journalists to continue to counter misinformation.

Washington Post journalist Elizabeth Dwoskin on May 20 detailed some of the technology workarounds that people have exploited to elude the rules of Google, YouTube, Facebook, TikTok and other social platforms, all of which aim to ban content that contains misinformation that could cause “real-world” harm and an immediate threat to public health.

Though the video trailer for “Plandemic,” which touts numerous false conspiracy theories has been removed from social media sites, researchers found either pieces of the trailer or ways to access the entire trailer on YouTube and file sharing sites like Google Drive.

In addition to the strategy that Allen took, the Poynter Institute wrote about six additional approaches for journalists to use in stories to counter misinformation. They include:

A further approach,  outlined in The Debunkers Handbook, co-authored by psychologist Stephan Lewandowsky, is to offer a plausible alternative scenario (based on evidence) to the misinformation.

Still, no matter how hard journalists work, there will be a set of people who are not rational and are “immune” to evidence.

“The vast majority of people are grateful for the debunking and responsive to it. That should be your target of communication if you have a choice,” Lewandowsky told Allen in an ProPublica interview. “The hardcore conspiracy theorists are unlikely to change their minds.”