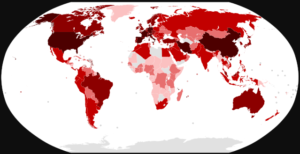 Michele Cohen Marill is one of three journalists glad to be back in the U.S.

Marill, an Atlanta-based independent journalist, is one of four 2020 AHCJ International Health Study fellows and was in Germany conducting interviews for her fellowship when President Trump announced the unprecedented travel restrictions from Europe to the U.S. on March 11.

Fortunately, she was able to quickly finish up her interviews and return home to Atlanta on March 14, but she is now in self-quarantine.

“As we landed in Atlanta, passengers applauded,” Cohen Marill wrote in a “How I Did It” personal essay about what it was like to be in Europe in the middle of shifting U.S. travel policies.

Two other fellows, Elana Gordon and April Dembosky, were in Europe and also had to cut their trips short. The fourth fellow in the group was unable to make his planned trip to the Netherlands because his project focused on older adults, who are at the highest risk of become ill from COVID-19.

None of the fellows have reported being sick withe virus.

The AHCJ International Health Study Fellowships is a six-month program, supported by the Commonwealth Fund, and allows veteran U.S.-based health care journalists to pursue a story or project comparing a facet of the U.S. health care system to that of another country. For 2020, the focus was on developed European countries in comparison with the United States’ health care system.

Cohen Marill is working on a story about integrated health care in Germany, Gordon on Portugal’s drug policies and Dembosky on women with post-partum psychosis in the United Kingdom.

As of March 19, the State department advised all Americans not to travel outside of the country, until COVID-19 is contained.