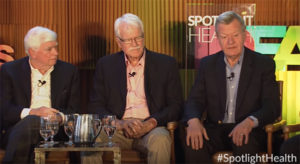 With the 10th anniversary of the Affordable Care Act approaching next month (March 23), I want to flag this video from the summer of 2018, when KHN’s Julie Rovner interviewed the five committee chairs who shepherded the law through Congress.

This was the first time that former Sens. Max Baucus (D-Mont.) and Chris Dodd (D-Conn.) and former Reps. Henry Waxman (D-Calif.) and George Miller (D-Calif.) and retiring Rep. Sander Levin (D-Mich.) had gathered for a public retrospective. All but Levin had retired by then and he left Congress soon after the event, which took place during the Aspen Ideas Festival’s health portion (then called Spotlight Health and now Ideas Health.)

Yes, the video is an hour or so but it’s illuminating and quite fun to watch. (I was there and the ex-lawmakers clearly were having some unchained fun.)

The former chairs reflected on the partisanship in Congress (which has gotten even worsen) and the differences between the earlier failed health care efforts of the Bill Clinton presidency and now. They spoke of how there was absolutely no way they were going to get Republican support for the legislation that became the Affordable Care Act — a lesson that Baucus, who spent many months searching for a deal with Republicans on the Senate Finance Committee, took longer to learn than the others.

“We tried,” Levin recalled. “But it was impossible. The polarization that existed in the House could not be bridged … On the Ways and Means Committee, we were totally stonewalled.”

The five lamented that they couldn’t get a final cleaned-up version of the ACA through the House and Senate (after Scott Brown, a Republican, entered the Senate the Democrats were one shy of 60 votes to approve a revised version of the bill passed in December 2009). And that it had flaws. That the Democrats had trouble explaining a complicated law made it easier for the GOP to demagogue about it, particularly after the botched implementation of the Healthcare.gov website in the fall of 2013.

The five all said they wished they could have gone even further than what the ACA ultimately achieved — but all described it as a historic achievement that protected people with pre-existing conditions and enabled millions of Americans to get health coverage. All saw it as a structure that could be built on in the future.

They acknowledged that the Democrats, and the Obama presidency, paid a political price for finally achieving a health care objective that had eluded them for decades. Yet none of them had any regrets. It wasn’t perfect — more work would need to be done. But all said it was the highlight of their career and absolutely worth it.