AHCJ member and freelance journalist Jen Miller earned $135,000 from her writing in 2019 and, after posting about it on social media and receiving a positive response, she decided to create a white paper to explain the details to others.

The 30-pager has a solid 11 chapters, including a By-the-Numbers guide to her income and examples (with templates) of how she landed four clients — a mainstream consumer publication (ahem, the New York Times), two B2B publishers, and a health care organization. She includes a “lessons learned” section at the end of each case study, too, to help others replicate her work. 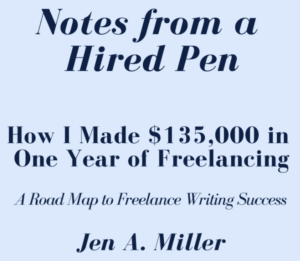 The paper feels like a great fit for AHCJ members who also write about health for consumer publications, trade publications and health organizations. I appreciate the approachable tone, too — she’s open about the fact that her year wasn’t an “overnight success,” and in reality, was a major comeback after 2017, which was one of her worst years, both financially and personally.

One of my favorite parts is her own journey into freelance writing. It reminds me that so many of us have similar paths, dreams and goals. We’re here to report and write, yet we need to approach our work like a business. She talks about the bumps along the way, including her recovery after the recession, as well as her 2017 crisis point and year of cross-country travel before making 2019 her best year yet.

After I reviewed the resource, Miller and I exchanged a few emails, resulting in this new Q&A.