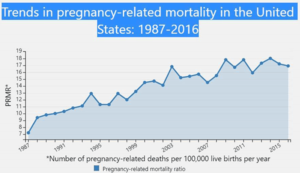 Source: Centers for Disease Control and PreventionThe number of pregnancy-related deaths per 100,000 live births has risen steadily since the CDC started reporting the data in 1987 when the rate was 7.2. In its most recent report, the rate was 16.9.

Note that the CDC defines pregnancy-related deaths as the death of a woman while pregnant or within a year of the end of a pregnancy.

One of the most overlooked statistics in the debate about how to reduce these deaths (also called maternal mortality), is that the highest rate of deaths in this category is among black women, a fact that Andrea King Collier points out in a new tip sheet.

For health care journalists, Collier adds that experts in maternal mortality agree that 60% of these deaths are preventable. So, what will it take for the United States to drop the death rate for all mothers and particularly for black women?

One of the sources she cites was an article in The Health Affairs blog that explained the law and how it calls on states to establish Maternal Mortality Review Committees (MMRCs). These committees would be a great resource for journalists seeking to localize their stories on the state or regional level, she adds.

She also reports on efforts to reform payment models, explaining that the current payment systems fail to cover high-value services adequately, do not hold providers accountable for overall costs and outcomes and do not encourage coordination among providers.

We’ve covered the need for pregnancy-related payment reform in two previous tip sheets. One was earlier this year, “How payment reform could help the U.S. reduce its high C-section rate,” and the other one was last year, “In maternity care, hospitals know what to do, but most fail to do it.”