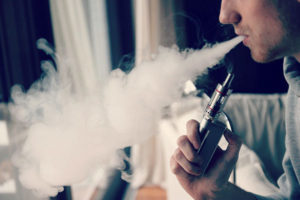 Concerns about e-cigarette safety, elevated by an outbreak of illnesses and deaths, continue to roil Washington, D.C.

Leading calls for action have focused upon measures that could stem the rise of vaping among young people. Federal data indicate that 27.5% of high school students now regularly use e-cigarettes. More than 5 million American youths are now vaping, up from more than 3.6 million in 2018, according to the 2019 National Youth Tobacco Survey.

In a move supported by First Lady Melania Trump, President Donald Trump in September announced plans to ban flavored e-cigarettes, which research has shown are particularly popular among young people. A Centers for Disease Control report released in 2018 estimated that 31% of teens use e-cigarettes due to the availability of “flavors such as mint, candy, fruit, or chocolate.”

Trump later delayed in moving forward on a ban after lobbying from vaping supporters and e-cigarette manufacturers.

“Trump, who has been under pressure from both sides of the vaping debate, has faced a difficult political balancing act on the issue,” NBC reporter Shannon Pettypiece told viewers in a recent story on the debate.

“Conservative activists have shown polling and other data to the White House and the Trump campaign to argue that cracking down on vaping could cost the president votes in key swing states such as Florida, Michigan and Wisconsin,” she noted, adding. “But failing to take concrete action on the issue could hurt him with suburban women, a key demographic with whom he is already struggling, who are concerned about the health risks to teenagers and young adults.”

While Trump has wavered on e-cigarette restrictions, Democrats in the U.S. House of Representatives have moved ahead on restrictions.

In November, the House Energy and Commerce Committee approved the Reversing Youth Tobacco Epidemic Act, which would ban flavored tobacco products, including e-cigarettes, raise the purchasing age for tobacco products to 21, ban sales that aren’t “face-to-face” and crackdown on online advertising.

The measure is expected to win approval from the full House. But it is likely to die in the Republican-led Senate, where Majority Leader Mitch McConnell has introduced his own bill, the Tobacco-Free Youth Act.

McConnell’s bill would raise the purchasing age to 21 but not otherwise restrict sales, reported Sarah Owermole, who covers the vaping debate for Politico.

As leaders in Washington continue to wrangle, the authors of an analysis posted on the Brookings Institution’s Brown Center Chalkboard offer an examination of the health concerns and policy forces in play.

“Federal action to stop the teenage vaping epidemic will likely fall short on some, if not most, metrics,” predicts the report, The Youth Vaping Epidemic: Addressing the Rise of E-Cigarettes in Schools. “Consequently, the onus will fall on state governments, boards of education, and local school districts to combat the issue of teen vaping.”

Some jurisdictions are already taking steps. “For example,” the authors write “four states have banned vaping on school grounds, seven states have enacted or will enact a ban on flavored vaping products, and 18 states have raised the legal smoking age from 18 to 21 in the past three years.”

Reporters: Is there news on the vaping regulation front in your community?