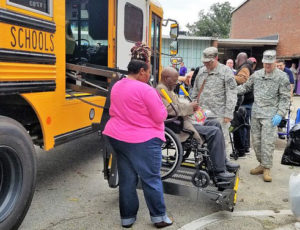 Hurricanes. Wildfires. Floods. Blackouts. We all like to think we would know what to do when a disaster or emergency strikes, but a new national poll shows that many adults over 50 haven’t taken key steps to protect their health and well-being in case of severe weather, long-term power outages or other situations.

Less than half have signed up for emergency warning systems offered by their community, which can give crucial information in case of storms, natural disasters, lockdowns, evacuation orders, public health emergencies and more.

Fewer than a third have put together an emergency kit with essential supplies and medicines to get them through an emergency at home or take with them in an evacuation. And only a quarter of those who rely on electrical power to run health-related equipment have a backup power supply, according to the most recent University of Michigan National Poll on Healthy Aging.

“By knowing areas where older adults are well prepared, and where they are not, programs can work alongside older adults to become fully prepared and ready,” said study collaborator Sue Anne Bell, Ph.D., F.N.P., a University of Michigan school of nursing professor. Bell’s research focuses on the health effects of disasters on older adults.

As Hurricane Dorian slowly makes its way up the east coast, “There are some steps older adults should be taking now, if they haven’t already done so, Bell said in a telephone interview.

“First, make sure they know their evacuation routes and know what they will do if they need to evacuate. Go earlier, rather than later. Call and have the resources and abilities let them do that sooner rather than later,” she said.

Older adults have some unique challenges in emergency situations, according to Bell, who has deployed as part of disaster response teams. She was in Paradise, Calif., after wildfires devastated the town and in Puerto Rico after Hurricane Irma. “Mobility or chronic health conditions might prevent them from just jumping in the car and leaving. Some no longer drive. So making some early preparations now in terms of evacuations is important.”

“It’s really important to be talking to family about this storm or any disaster which may happen, she said. Let them know what you’re doing and how you will communicate. “This way, family members can be in contact and know they’ve taken the necessary steps.” Also, if the community has a local emergency alert system, older adults should sign up so they can get regular communication.

Researchers at the University of Michigan Institute for Healthcare Policy and Innovation asked a national sample of more than 2,200 adults aged 50 to 80 questions about their readiness for several kinds of emergency situations. Three-quarters of those polled said they had experienced at least one major emergency in their life and more than one in five adults in that age group (22%) had experienced some type of emergency in the past year, such as a power outage lasting more than a day, severe weather, evacuation from their home, or a lockdown. More than half of respondents (53%) thought they were likely to experience an emergency or disaster in the next year.

The poll found that only 40% of older adults have spoken with their loved ones about such issues and just 44% have signed up for their community emergency warning system like this one. Additionally, only 29% had a prepared emergency kit and 27% had a generator. While the majority of those polled (69%) felt confident they were prepared in case of a lengthy power outage, only 15% felt ready for an evacuation; only 11% were ready for a weather-related event or lockdown.

Most people (94%) said they would have transportation to leave home, however, a quarter of respondents (24%) said they’d have trouble affording to stay in a hotel somewhere for a week or more.

If they do need to leave home in an emergency, older adults should make sure they have enough prescription medications to get by. They can ask their pharmacist or physician for a week’s extra supply and keep it handy in case of evacuation, according to Bell.

Everyone needs to have a “go bag” or personal preparedness kit, which should have the essentials that you need to survive for a certain number of days, she said.

The Department of Homeland Security and the American Red Cross offer advice on what to pack. Go kits can also be ordered online. Contents will vary depending on location and medical needs. This New York Times article has advice on packing a kit for any type of emergency.

Another huge challenge in emergencies are the 2.5 million Medicare beneficiaries who rely on electrically-dependent medical equipment, like ventilators, which help them remain independent at home. A power outage can quickly become a life-threatening situation. The Department of Health and Human Services runs the federal emPower registry which gives emergency responders, public health officials, utility companies and community members a means to find electricity dependent Medicare population in their community, down to ZIP code levels.

Research has shown that you can tell people that they need to prepare all day long, but that doesn’t mean that they’re actually going to do it until they have incentive to do it, according to Bell.

Nurses can play an important role in helping older adults are prepared for whatever emergency may strike. “During a health care visit is a great opportunity to make that intervention, because it’s a place that older adults regularly are,” she said. “It’s one of those things where when the more you hear the messaging, you hope that the more it might be taken up.”

You never really think it’s going to happen to you, until it does. Taking steps to prepare is something that is easy to put off, but everyone, and particularly older adults, should practice all-hazards preparedness, Bell suggested. It’s the idea that you’re ready, as best you can be, for whatever comes through your door.

Journalists may want to check with community officials about whether there is a plan in place for vulnerable older adults — those on electrically dependent medical equipment, the frail or homebound, those with mobility problems, and those without nearby family to assist.

Are there local evacuation shelters which accept pets? Many people refuse to evacuate without them.

How are your local Red Cross or other organizations preparing to assist older residents in the next major event? Do utility companies have a plan for restoring electricity to those needing equipment like ventilators?