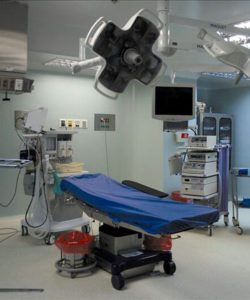 Here’s a somewhat worrisome report from the Office of Inspector General.  Some two-thirds of the ambulatory surgery centers (ASCs) in the nation are supposed to be surveyed for quality and safety issues by their state health agency, according to Medicare rules. But a troubling number of states seem to be ignoring their responsibility.

Since Medicare reimburses ASCs for certain approved procedures — including some that carry higher risks for complications — federal officials have set requirements for how often and how extensively those state agencies are supposed to inspect those facilities.  One could argue, and many have, that stricter standards should be put into place, but this report is just about the compliance of the ones that do exist.

The agency found that 15 states failed to meet Medicare’s highest priority benchmark, to survey at least 25% of their ASCs every year, although seven of those 15 came within one survey of meeting their quota.

The OIG found that in fiscal year 2017, more than half of the states — 28 — did not meet Medicare’s second priority requirement that those states survey all their ASCs at least within the prior six years. And some of those lapses were among high-population states, like New Jersey and North Carolina, which left up to 10% of their ASCs unsurveyed since prior to 2013.

Some of those failed states are among the largest: California, Pennsylvania, Texas, New York, Florida, Illinois, Michigan and Ohio, nine of the 10 most populous states.

Eleven states failed to meet both priority requirements and three — with a total of 213 ASC facilities within them — Hawaii, Nevada and New Jersey — failing to meet either requirement by large margins, the report said.  The report’s tables identify which states failed and which passed.

Why is this important? For starters, about 3,700 of the 5,603 ambulatory surgery center facilities in the nation in FY 2017 were under the purview of their state health agency. The rest, some 1,900 ASCs, are surveyed not by their state agencies but by a Medicare-approved “deeming” agency such as The Joint Commission. The reason for the difference was not addressed in this report, but that distinction in itself, and whether deeming agencies find more problems, might make an interesting story.

Thus, these state agencies “play critical roles in ensuring the health and safety of Medicare beneficiaries who receive medical procedures, including invasive surgeries, from ASCs,” and because “periodic surveys are an essential tool for ensuring that ASCs meet the minimum standards for health and safety,” the report said.

Second, ambulatory surgery centers are not only increasing in number, but they are doing riskier procedures like joint replacements, for which they are paid less than if the procedure were performed in an inpatient or hospital outpatient setting.

To show the importance of these surveys, it appears that the state agencies that did conduct surveys found problems, and some of them were significant threats to patient safety.

Just over three-fourths of the facilities surveyed between fiscal years 2013 and 2017 had at least one deficiency and 25% had serious deficiencies, with the most common one being lapsed infection control, which made up about 20% of the deficiencies. Serious deficiencies are of such gravity as to indicate what the report called “pervasive noncompliance,” posing “a serious threat to patient health and safety.”

“These findings underscore the importance of timely surveys so that deficiencies do not go unaddressed even longer,” the report said.

Other findings or story angles:

There’s a lot of meat in this report, especially as the Centers for Medicare & Medicaid Services has plans to allow ASCs, many of which are privately owned rather than affiliated with a hospital system, to do a lot more procedures that involve increasing complexity and are increasingly invasive.