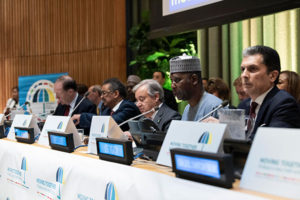 Welcome to UN Week in New York City … when savvy residents know better than to venture anywhere near the east side, avoid driving (or cabbing) below 50th Street and that the quickest way to get anywhere is by subway or on foot. Gridlock disaster doesn’t begin to describe it.

It’s a time when global leaders come together to talk about mutually important issues, like climate change (check out Greta Thunberg’s speech), trade, war and peace and world health.

A high-level meeting on universal health coverage, “Universal Health Coverage: Moving Together to Build a Healthier World,” brought together heads of state, political and health leaders, policymakers and universal health coverage champions on Monday to advocate for health for all. Leaders issued a joint declaration, calling for countries to commit to achieving universal health coverage by 2030. This includes access to essential health services, like a skilled health workforce, financial risk protection, and access to safe, quality, effective and affordable medicines and vaccines for all.

Among the most pressing health issues is population aging. It’s not just the U.S. that’s getting older — nations worldwide are experiencing a shift in demographics and seeking cost effective ways to care for, house, and support their aging populations, according to a report from the World Health Organization. The world will soon have more older people than children and more people at extreme old age than ever before, the group says. While people are living longer, not all are living in good health, or with sustained periods of social engagement and productivity.

“Population ageing is poised to become one of the most significant social transformations of the twenty-first century, with implications for nearly all sectors of society, including labour and financial markets, the demand for goods and services, such as housing, transportation and social protection, as well as family structures and intergenerational ties,” according to the report.

If you cover any aspects of global aging, or want to compare how the United States is doing against other nations, here are some quick stats and resources you can include in your stories:

The NIH’s Gateway to Global Aging Data, is a platform for population survey data. There’s a digital library of survey questions, a search engine for finding comparable questions across surveys, and identically defined variables for cross-country analysis.

The Global Aging Initiative (GAI) explores the long-term economic, social, and geopolitical implications of demographic change, and especially population aging, in the United States and around the world. The Center for Strategic & International Studies established the GAI in 1999 to raise awareness of global aging, to inform policymakers and the public about the challenges it poses, and to encourage timely and constructive reform.

As we’ve seen, the senior population in your community is growing. Are you covering the health stories that accompany this local growth?

Join us for a specialty workshop next month that will provide you the data, the experts and the story ideas you can put to use right away. Visit the Journalism Workshop on Aging and Health website.