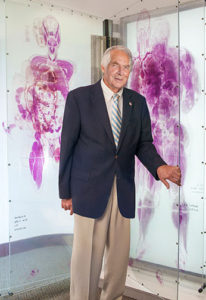 Donald A.B. Lindberg, M.D., 85, the director emeritus of the National Library of Medicine (NLM) within the U.S. National Institutes of Health whose support helped create an important fellowship program with AHCJ, died on Aug. 16 from head injuries after a fall at his home.

Lindberg was instrumental in the creation of the Association of Health Care Journalists-NLM Fellowship program in 2008 and often met with the journalists who were selected as fellows.

Lindberg was NLM’s director for 31 years from 1984-2015. He was the founding director of the White House High Performance Computing and Communications Program from 1992-95. Lindberg also was the U.S. National Coordinator for the G-7 Global Healthcare Applications Project within the Global Information Infrastructure Initiative from 1996-2000.

“Thanks to Dr. Lindberg’s leadership in helping create the AHCJ-NLM Health Journalism Fellowships, dozens of health journalists have broadened their researching skills,” said Jeff Porter, AHCJ’s director of education. “The fellowship stands as a testament to his foresight in the development of resources that have opened important health information to journalists in particular and the world at large.”

At NLM, Lindberg oversaw the digitization of Index Medicus into PubMed, which provides free Internet access to research published by international, refereed medical journals. During his tenure as NLM director, the agency launched MedlinePlus.gov and ClinicalTrials.gov; and widely used online repositories of genetic and genomic sequences.

Lindberg’s medical informatics peers often described him as a self-reflective disciplinary giant, who was incisive about health care, federal governmental issues, and politics – with a sense of humor.

Lindberg was the author of three books (The Computer and Medical Care; Computers in Life Science Research; and The Growth of Medical Information Systems in the United States) and more than 200 academic publications. To establish an oral history dimension within NLM’s Native Voices websites and exhibition, Lindberg interviewed more than 100 Native American, Alaska Native, and Native Hawaiian physicians, leaders, healers, clergy and medical students.