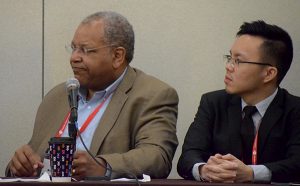 “I do worry that precision medicine and immunotherapy are overhyped,” said Otis W. Brawley, M.D., Bloomberg distinguished professor of oncology and epidemiology at the Bloomberg School of Public Health and John Hopkins Kimmel Cancer Center. Brawley also was the Thursday night speaker at Health Journalism 2019.

Part of the challenge is these novel treatments aren’t available for all cancer types, said Drew M. Pardoll, M.D., director of the Bloomberg-Kimmel Institute for Cancer Immunotherapy at Johns Hopkins.

“We need to bring the public to the middle to understand there are certain types of cancer where it is feasible,” Pardoll said.

Precision medicine for oncology is precisely targeting a tumor and optimizing therapy to a specific patient while immunotherapy harnesses a person’s own immune system to target and fight off cancer cells, explained Saurabh Dahiya, assistant professor, blood and marrow transplantation program, Greenbaum Comprehensive Cancer Center at the University of Maryland School of Medicine.

Treatments are converging with combinations of chemotherapy and immunotherapy, for instance, and “the point of intersection, I think, will continue to grow over the next few years,” Pardoll said.

Pardoll, who has studied immunotherapy for several decades, said he believes there is “tremendous promise… We’ve mined about 2% of what can be mined.”

Cancer, as we think of it, also will continue to evolve, as in the case of breast cancer in which the presence or absence of genetic markers has caused a rethinking in the public consciousness as well as specific treatments. “Breast cancer is a number of different diseases,” Brawley said.

The panelists expressed concerns that too much focus on immunotherapy could draw attention away from other promising cancer therapies. They also worried that racial, geographic, age and other disparities could be exacerbated due to the high costs of individualized cancer treatment, which can cost hundreds of thousands of dollars.

There was praise for the Food and Drug Administration’s handling of novel treatment approvals, considering the rapid pace of development.

“I think the FDA is doing a great job of keeping up with the science,” Dahiya said.

Pardoll agreed, adding that the FDA is working to discourage too many “me too” drugs hitting the market that are retreads of already effective or tested therapies.

Other obstacles remain to widespread use of immunotherapy treatments, the panelists said.

For instance, CAR T-cell therapy, which uses an individual’s specially altered T-cells to fight cancer, has produced remarkable and high-profile remissions and even cures in some patients. The FDA approved CAR T-cell therapy for some patients with relapsed or refracted non-Hodgkin lymphoma and for patients with relapsed or refracted acute lymphoblastic leukemia up to age 25.

CAR T-cell therapy has produced a cure in some patients, but it has failed in others. This is because either the number of cells is insufficient or they aren’t viable, Pardoll explained.

“This is solvable and it is scalable,” Pardoll said. “It is still going to take time.”