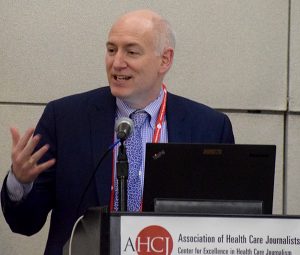 While scientists are getting closer to understanding the various causes and risk factors for Alzheimer’s disease and dementias, there’s still no cure.

However, that doesn’t mean life is hopeless for millions of people who have the disease, or their families.  There’s a lot we can do improve their quality of life, according to panelists at a Health Journalism 2019 session on Alzheimer’s.

Panel moderater Felice Freyer, health reporter at the Boston Globe, opened the session with a personal take on the lack of resources and education about how to help her mother, who has dementia. She and her siblings were frustrated by the complete lack of guidance and resources how to make her life happy and comfortable and worthwhile. She’s going to be with us for some years, and we want those years to be OK for her.”

Freyer’s situation is typical of many caregivers, according to Halima Amjad, M.D., assistant professor of medicine, Johns Hopkins University School of Medicine. She’s a geriatrician and researcher in dementia care, focusing on how to improve diagnosis of the disease, patient care, and family support. Hamjad also spoke from personal experience, highlighting how her father, a successful dentist, had to eventually give up his practice, and struggled with tasks of daily life, as his symptoms of a related disease, frontal-temporal dementia, worsened.

“One of unique challenges with diagnosing the disease at an early stage is that most people are still working, she said. “The challenge is how to get them to stop potentially unsafe activities, like driving. Approximately 20 percent of those with dementia criteria were engaged in these types of activities, but at some point in the disease process, it becomes unsafe, she said.

Nationally, about 5.5 million people have Alzheimer’s disease, a progressive, irreversible, and eventually fatal neurodegenerative disease. About 5.3 million people with Alzheimer’s, are 65 or older, according to the National Institute on Aging. The Alzheimer’s Association says the rapid growth in the older population means more people are living with the disease, which will continue to affect the U.S. economy. By 2050, the total cost of care for Alzheimer’s is projected to increase to more than $1.1 trillion. Most of that burden is on families. In 2017, 16 million Americans provided an estimated 18.4 billion hours of unpaid care in the form of physical, emotional and financial support – a contribution to the nation valued at $232.1 billion.

Many people with dementia have symptoms and functional challenges before they get a formal diagnosis, she said. A study of National Health and Aging Trends data led by Amjad, showed that more than half (58.7%) of older adults living with dementia have never been formally diagnosed or are unaware of their diagnosis. Even fewer families (31.8%) are aware of their loved ones’ situation.

Caregivers may already be stressed and patients may be receiving inappropriate treatment that exacerbate symptoms like agitation, and can contribute to faster decline. Earlier diagnosis could help both the person with the disease and their families better understand issues like personality changes, treatments which can slow progression and eventual prognosis.

The right approaches can help everyone cope better, according to Brent Forrester, M.D., chief of the Division of General Psychiatry, McLean Hospital, and medical director for behavioral health in the Center for Population Health at Partners Health Care, Boston. He specializes in the treatment of older adults with behavioral complications of Alzheimer’s disease and related dementias.

“Determining the cause of behavioral and psychiatric symptoms of dementia (BPSD) informs treatment planning,” he said. Once pinpointed, it’s an opportunity for geropsychiatrists and other professionals to review key objectives and limitations of current treatment approaches.

What can help? Better documentation of symptoms and more communication with caregivers on what to expect and what local resources are available. “Agitated is not a helpful descriptor,” he said. He also pointed out people with Alzheimer’s don’t wind up in long-term care because they can’t remember families names; it’s because of caregiver burnout.”

BPSD symptoms include apathy, depression, agitation, sleep disturbance, irritability, anxiety, disinhibition, delusions and hallucinations. Half of patients with psychotic symptoms become aggressive towards others. Yet, BPSD may have several triggers — it may be due to dementia-related brain changes, co-morbid conditions or responses to environmental conditions. There are no FDA-approved therapies, but off-label use of antipsychotics are modestly effective at reducing symptoms. However, it comes at price of side effects like sedation, ataxia, and increased stroke risk. Non-drug approaches include exercise, which can help lower agitation and improve mood. “Keeping people active is critical,” Forrester said. For some, Dronabinol, a synthetic cannabinoid, works well.

There are ways we can support “a good life” for people with dementia and their families through other non-pharmacologic approaches, according to Laura Gitlin, Ph.D., an applied research sociologist and dean of the College of Nursing and Health Professions at Drexel University. She highlighted a tailored activity program, or TAP, that focuses on what a person can do, rather than what they can’t do. The program helps those with dementia re-engage in daily life, and by doing so, helps manage behavioral symptoms and functional dependence.

It’s an evidence-based program that helps improve quality of life and is adaptable to various environments such as assisted living and adult day programs. She shared the case of a women whose agitation was re-directed to align with her previous life as a homemaker and was given a task of folding laundry. It helped calm her down, make her feel useful, and relieved boredom. Caregivers, therapists and other health professionals are taught to assess the recipient’s capabilities and adjust activities as needed as the disease progresses.

“With the right strategies, things can change quickly and we can avoid problems,” Gitlin said.

Not only did the program mean caregivers had more time for themselves, but in studies, those who used the TAP program had lower health costs overall than those who did not use it.