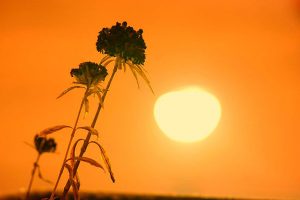 One angle journalists can take to tackle huge issue like climate change and public health is to take a focused look at how life might be changing for low-income people in a specific city.

This is what NPR’s Lulu Garcia-Navarro did earlier this spring in her report on how climate change is affecting residents’ health in Miami.

Navarro spent time with Jorge, a fruit vendor in working-class neighborhood near industrial warehouses. He sends back nearly all his earnings to his five children in Ecuador, so to save money he lives in a windowless shed in the backyard of a house. To keep cool he keeps his door open, which enables potentially disease-carrying mosquitos to fly into his room. For Jorge, climate change has made summer days almost unbearable. He tries to stay in the shade and keep long-sleeves on to keep the sun off. He can barely afford air-conditioning.

“When you work in the streets,” Jorge told Garcia-Navarro. “You really feel the change.”

The reporter also interviewed Dr. Cheryl Holder, a physician who co-founded Florida Clinicians for Climate Action, which is helping patients connect the dots between mate change and symptoms of respiratory and heat-related illnesses. Holder is very worried about the challenges facing very poor people trying to survive as the planet’s temperature continues to rise.

Science and health writer Linda Marsa has been covering climate change and its impact on public health for much of the past decade and says Garcia-Navarro has the right approach.

The best resources for journalists “are local activist organizations. Find a community-health organization. They are working on the health angle of all this,” she says.

Marsa wrote a 2013 book “Fevered: Why A Hotter Planet Will Hurt Our Health-And How We Can Save Ourselves,” that was one of the first deep dives by a journalist into the issue of climate change and public health.

In a recent AHCJ “How I Did It” question-and-answer session, Marsa shared some of what she learned about how a reporter can focus their coverage of the beat. She also provided some resources for reporters who’d like to do similar work.

“I really learned a lot from the local public health officials and the community activists in each of the places that I focused my book,” she said. “So [it was] local folks in the Central Valley in California, who help me write about Valley Fever and the local health workers in New Orleans [helped me write about public health infrastructure]. I would say [take the same approach] today.”

Marsa’s book looks at climate change through the lens of agriculture disruption, air pollution, the spread of infectious diseases, heat waves, health system disruption, water pollution and drought. Each chapter features vivid local stories that illustrate how people are being directly impacted by climate change and how the poor tend to the first to feel the pain.

“Climate change is an environmental justice issue, which was illuminated with [Garcia-Navarro’s] NPR story,” she said. “But this isn’t going to affect just the poor. Everyone is going to feel the effects, and none of us are immune. It’s important to report on that, too, and not just people who can’t afford decent housing and air conditioning.”

Marsa’s book ends on a hopeful note by examining some successful policies aimed at addressing the disruptions caused by climate change.