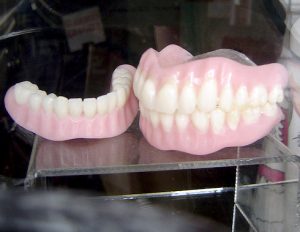 Over the course of the past year, more than two dozen Texas inmates contacted the Houston Chronicle with grim stories of their life behind bars —without teeth.

Some choked on their food. Others subsisted on pureed meals. They shared their medical records and their grievances. They told the newspaper that their pleas for dentures had gone unanswered by prison officials.

In a piece that recounted their troubles, reporter Keri Blakinger documented last fall that prisoners in the state system routinely had been denied dentures on the grounds that the prosthetics were not considered a “medical necessity.”

“In 2016, prison medical providers approved giving out 71 dentures to a population of more than 149,000 inmates, many of whom are elderly, have a history of drug use or came from impoverished backgrounds with sub-par dental care to begin with,” Blakinger wrote.

“It’s a sharp decrease from 15 years ago, when there was still a denture-making program in-house and Texas medical practitioners approved more than 1,000 costly dental prosthetics.”

Regardless of their suffering, the legal path to obtaining dental services has remained challenging for prisoners, experts have observed.

The U.S. Constitution prohibits cruel and unusual punishment. A 1976 U.S. Supreme Court decision, Estelle v. Gamble, declares that prisoners must be protected from “deliberate indifference to their serious medical needs.” But how dental care fits into the picture for more than 2 million incarcerated Americans remains a matter of debate.

“The issue is up in the air,” Jay Shulman, a Texas A&M adjunct dentistry professor who has served as an expert witness in lawsuits over prison dental issues told the Chronicle.

The September article was illustrated with a photograph of one of the Texas inmates who had told his story: 58-year-old David Ford, somberly pulled down his lip to display a toothless gum. Ford, who is serving time for aggravated robbery, told the newspaper that when he came into the prison system in 2013 he had had partial dentures but they broke. Then he lost his remaining teeth. He had been trying, without luck, to obtain new dentures ever since.

Then, in December, readers were treated to a new picture of Ford. This time he was smiling, with a sparking set of new teeth. His long-sought dentures were approved after the Chronicle submitted a request to interview him, Blakinger recounted in a follow-up story.

“First he was taken to the prison hospital in Galveston, so surgeons could shave down the bone so dentures would fit in. Then, he waited three weeks for his mouth to heal and went in to take impressions. He tried a plastic version and had more measurements taken, and finally – on Nov. 26 – he got his new teeth,” she wrote.

“Two weeks later he is “still in awe and fielding questions from other prisoners who want to know how they, too, can get teeth.”

There may be hopeful news for them too, Blakinger reported.

“…Ford’s new pearly whites could mark the end of an era for the state’s prison system,” she told readers. Starting this spring, the Texas Department of Criminal Justice is expected to become the first corrections agency in the country to employ 3D printing technology to begin producing dentures for prisoners in-house, she wrote.

“A speedier alternative to traditional denture-making, technicians at prisons across the state will use wands to scan the mouths of toothless inmates, then send off the image to a central location for 3D printing, cutting down the process from months to weeks,” she explained.

“The system will avoid the need to transport prisoners across the state and, though the initial purchase of the equipment is pricey, officials say the individual sets of dentures could be as little as $50 a piece.”

Shulman, the dental advocate from Texas A&M greeted the news with caution.

As with traditional dentures, the new prosthetics will require adjustments afterward, he said.

“We’re basically going to have to step back and see what happens,” he said. “I can’t think of any time government does well in dealing with a new technology.”