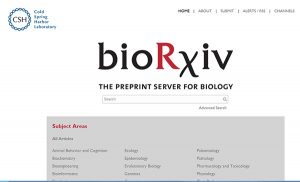 The bread and butter of medical research reporting traditionally has been coverage of peer-reviewed studies. However, some new kids are threatening to elbow their way into the conversation and reporters should be prepared.

Preprints aren’t exactly new to scientific research in general, but are a recent phenomenon within biological research and rapidly growing, according to graphs at PrePubMed, a preprint aggregator and indexer similar to but unaffiliated with PubMed. Preprints also are making their way into medical/clinical research.

It’s time for reporters to prepare themselves for the imminent wave of clinical research preprints, according to AHCJ President Ivan Oransky, M.D. In an article on the Gabriel Garcia Marquez Foundation website (scroll down its homepage for the English version), he discussed what the growing popularity of preprints in clinical research means for health reporters.

Oransky references an earlier piece in Stat that applauds the National Institutes of Health’s embrace of preprints. Explaining their appeal for researchers, he notes, “Rather than wait to go through the peer review, which can take weeks, months, or even years, other scientists can criticize, improve, and even build on the work at a faster pace.”

The big question is whether journalists — long cautioned not to cover any science that isn’t peer-reviewed, should report on research presented in preprints. Oransky offers a solid argument for a cautious “yes.”

“It should be noted that some of the biggest scandals about research that turned out to be wrong involved peer-reviewed research,” he writes, referencing the Andrew Wakefield study in The Lancet that devastated vaccine confidence and the STAP stem-cell debacle at Nature. “None of that means we should abandon peer review,” he writes, “but neither does that mean that we should treat peer-reviewed papers as infallible, and ignore preprints because they have not been through the process.”

Oransky offers this advice: understand peer review’s limitations, become familiar with preprint servers (such as arXiv, bioRxiv and psyArXiv) and “ask the same tough questions about peer-reviewed research as they are prepared to ask about studies that appear as preprints.” Specifically, he recommends asking, “Was this preprint submitted to a journal before it was posted, and if so, what happened?”

While some journals, such as NEJM (under the Ingelfinger rule) and JAMA Network journals, expressly refuse to consider manuscripts already published as a preprint, most journal networks, including behemoths Wiley and Elsevier, and top journals will accept them. Science, PNAS, Cell, The Lancet and both BMJ and Nature Publishing Group accept preprints. (The most comprehensive list of journal policies is actually on Wikipedia. The Wikipedia entry on preprints  also has probably the comprehensive listing and description of preprint sites.)