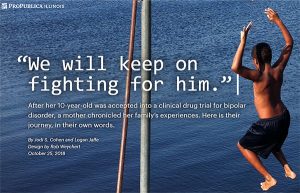 Most often, reporting on medical studies means recounting numbers, demographic details, findings and statistical probability values that are so abstract that it’s easy to forget they all refer to actual people enrolled in the study. With epidemiological studies, the researchers themselves often never meet the people they report on, especially if it’s a retrospective study that primarily relies on electronic medical records.

But clinical trials are a different story. Real people enroll in randomized controlled trials of drug or device interventions. They tend to be people with medical issues so serious that they’re willing to participate in an experiment to find a better therapy. Sometimes — probably more often than not — it doesn’t work for them. And sometimes it leaves them far worse off.

Journalists not only must remain aware that these stories exist but seek them out and report on them when possible. The human side of clinical trials is just as much a part of the story of scientific inquiry and progress as the positive and negative results and FDA approvals that dominate the headlines.

While it can be difficult to find these stories, ProPublica Illinois had a remarkable feature on a young boy (called “Wilson” in the story to protect his privacy) with bipolar disorder shows how it can be done — and why it’s so important to try. Moreover, with Twitter, Facebook groups, CaringBridge and other social media, it can be easier than it’s ever been to find these stories if a reporter spends the time to look.

Following an investigative report about dangerous research studies conducted by University of Illinois psychiatrist Mani Pavuluri, ProPublica Illinois found and published the story about a young boy with bipolar disorder who was harmed by his research. ProPublica Illinois tells his story by alternating between the actual online journal entries his mother wrote during the trial and short excerpts that provide context for her entries.

As Jodi S. Cohen and Logan Jaffe write, “The journal, which covers late 2010 and early 2011, records the family’s journey through a desperate attempt to help their 10-year-old son, laying bare the heartbreak, loneliness and stress of raising a child with mental illness.” They also include present-day annotations from the boy, now 18, and his mother, providing more context for the long-lasting effects of participating in a medical trial and dealing with the illness itself.

While I wouldn’t call this fireside reading — it’s difficult to read and does contain disturbing content, including discussion of suicidal thoughts — it is very important and engaging reading, especially for those who report on medical trials.