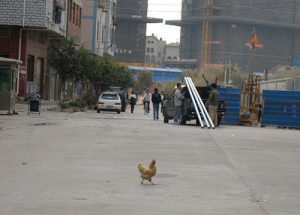 A strain of an influenza virus now circulating in China remains a potential pandemic threat while many gaps remain in preparing for such an event, a group of global health experts at the National Academy of Sciences (NAS) warned last month.

The virus spreading in China, called H7N9 (flu virus names reflect their protein makeup) first emerged among poultry workers in 2013 and has sickened 1,567 people and killed 615. China began vaccinating chickens over the past year to resist H7N9. The vaccinations have sharply reduced new H7N9 cases in people this year, but researchers say that virus has spread from chickens to ducks, increasing the possibility that it could infect humans through a different route.

“H7N9 is a virus that we are most concerned about,” Yoshihiro Kawaoka, a University of Wisconsin-Madison School of Veterinary Medicine virologist, said during a Nov. 26 panel discussion, “A Century After the 1918 Influenza Pandemic – Why Are We Still Concerned Today?” that took place prior to a Nov. 27-28 public workshop, “Readiness for Microbial Threats 2030: Exploring Lessons Learned Since the 1918 Influenza Pandemic.”

Kawaoka said laboratory animal testing indicates that H7N9 can be passed via breath droplets, making it a pandemic threat. While many member states of the World Health Organization (WHO), the United Nations’ global health arm, have worked to strengthen their health systems for a threat like H7N9, Victor Dzau, president of the National Academies of Medicine, warned that many countries still aren’t ready to deal with a pandemic.

Meanwhile, the WHO’s Global Influenza Surveillance and Response System will continue to watch for the emergence of potential dangerous flu viruses globally, said Jackie Katz, deputy director of the influenza division of the U.S. Center for Disease Control and Prevention.

“Since 1997, we have seen a two-fold increase in poultry and a steady increase in pigs farmed globally, and a steep increase in people moving globally. And these factors probably contribute to an increasing number of human cases of novel influenza [emerging] since the 1990s,” said Katz.

A flu pandemic would arise if a novel flu strain, for which most people have no immunity, spreads quickly around the world. In 1918, the global movement of troops fighting in World War I likely led to the spread of a flu that ultimately killed about 50 million.

Researchers are working on developing a universal flu vaccine that could prevent a pandemic, said Anthony Fauci, head of the National Institute of Allergy and Infectious Diseases. Scientists, however, are closer to developing a vaccine that could avert serious seasonal flu illnesses, than a pandemic flu. In February 2018, NIAID officials published a strategic plan for developing a universal flu vaccine, including changing the way flu vaccines are developed so they can be created quickly to respond to an outbreak. Currently, flu vaccines are made by growing them in eggs, which takes months.

Here are resources and past news coverage to help background you before reporting on pandemic threats: