The first lady of New York will keynote AHCJ’s Urban Health Journalism Workshop in October. Chirlane McCray, the founder of comprehensive mental health plan ThriveNYC, as well as the wife of Mayor Bill de Blasio, will talk about addressing behavioral health issues in the city.

She also spearheads the Cities Thrive Coalition of mayors, with representation from more than 150 cities from all 50 states, advocating for a more integrated and better-funded behavioral health system.

The workshop will bring together journalists and health experts Oct. 18-19 in New York City to offer resources and story ideas about the health challenges facing 81 percent of the United States’ population.

The workshop will start with a session about urban health’s own distinct differences, featuring New York’s acting health commissioner and researchers who can help journalists build a framework to use in writing about health in their own cities. 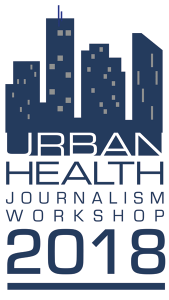 And, while violent crime saw a downward trend in most U.S. cities for a few decades, disturbing waves of bloodshed in Chicago and other cities are raising public health concerns. A panel on urban violence will look at recent trends, review prevention strategies and explore questions about what may be coming next.

Another session will focus on the issue of “supervised injection facilities” – where addicted people have a place where they can take illicit drugs under the watchful eyes of medical professionals – to combat opioid overdoses in cities. Attendees will hear from a Vancouver doctor who helped found North America’s first safe consumption site, along with activists and officials who have grappled with the issue in U.S. cities.

More panels will focus on using health data for local stories, trends in urban aging and childhood, covering maternal health disparities, how health providers are finding ways to engage minority populations, and looking at how homes and neighborhoods impact health.

Local workshop hosts are the Department of Population Health at New York University School of Medicine, The New York Academy of Medicine and the Science, Health and Environmental Reporting Program, Arthur L. Carter Journalism Institute. Sponsors are The Leona M. and Harry B. Helmsley Charitable Trust, the Robert Wood Johnson Foundation and The Commonwealth Fund.