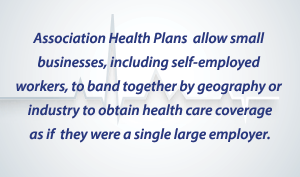 Health care researcher Sabrina Corlette told us about Short-Term Limited-Duration Plans and Association Health Plans – two options allowed by the Trump administration that may undermine the ACA markets – during a webcast in July. You can see her slides and listen to the webcast here.

Corlette, a research professor at Georgetown’s Center on Health Insurance Reforms (CHIR) and a former Senate health policy aide, (more on her background here) covered a lot of ground – and a related CMS rule was posted soon after her talk. So we’ve broken this up into two blog posts, this one about Association Health Plans, or AHPS, and the next on Short-Term Limited-Duration Plans.

AHPs “have actually been around for a long time. They are not new,” Corlette said. “They have been regulated at both the state and the federal level.” (They were a kind of plan known as MEWA – multi-employer welfare arrangements).

They may have been regulated – but they weren’t regulated well. Benefits were skimpy. Plans were sometimes insolvent – they just didn’t have the money to pay the claims. And some committed outright fraud.

The Obama administration tightened the rules– and didn’t encourage their expansion. They were subject to what Corlette described as a “lookthrough.” Under the umbrella of an AHP, if an AHP was selling to individuals, it had to meet ACA rules for the individual market. If it was selling to small businesses, it had to follow those ACA rules. Regulators “looked through” the AHP umbrella and made the underlying health plan contracts follow the appropriate set of ACA rules.

That is changing under the Trump administration. “Association Health Plans [will bypass] a number of Affordable Care Act rules,” she said.

The Trump administration didn’t scrap all regulations but has explicitly exempted AHPs from key requirements of ACA plans. Indeed, the administration is putting them forward as an alternative to the ACA – a cheaper, more lightly regulated alternative that may be particularly attractive to small businesses and people who don’t get insurance on the job and aren’t subsidized in the exchanges—a population without a lot of fabulous affordable comprehensive coverage choices.

Even though President Trump has claimed several times that “millions” of people have signed up for AHPs, that’s simply not the case. They won’t even be on the market until Sept. 1. (In an interesting aside, my colleague Adam Cancryn wrote a fun piece for Politico about how the main business groups, notably the NFIB, which have lobbied for AHP expansion for many years have decided not to offer them to their own members.)

AHPS let small businesses or even self-employed people pool together to create health care plans. They do not have to cover all the essential benefits in the ACA (such as maternity, mental health, prescription drug coverage, although some may choose to include them). They do have to cover preventive care, and like big plans under the ACA they cannot impose lifetime or annual coverage limits. They still have to cover people with pre-existing conditions – but there’s a catch. Since they don’t have to cover essential benefits, the benefits package could be constructed to make it unattractive or of limited use to people with health conditions. Basically, as Corlette explained, the regulations make these small group plans the legal equivalent of large business plans — but the big business plans tend to be more robust.

“Association health plans bypass a number of Affordable Care Act rules,” Corlette said. Legally they are treated as a large group, “not a loose collection of small employers.” But they are not likely to offer employees and their families the same protections.

States can regulate AHPs and the federal Department of Labor under the Trump administration does have oversight of solvency, which has been a problem with previous iterations. States may attempt to add more regulation and oversight. (There is still some dispute that looks likely to end up in court about the degree of state regulation of plans that cross state lines; Massachusetts and New York are leading the legal challenge.)

We don’t know how many people will choose this option. As Corlette noted, ACA backers fear that AHPs will pull younger and healthier people out of the ACA exchanges, worsening the risk pool and propelling premiums upward.

For anyone who wants more technical information about AHPS, Corlette and two colleagues wrote more in The Actuary Magazine. And here is the official explanation and FAQ from the Department of Labor.

Why Massachusetts and New York are suing – this post from the Georgetown center explains what states are concerned about as well as the sordid history (prior to the current Trump rule) of fraud and insolvency.