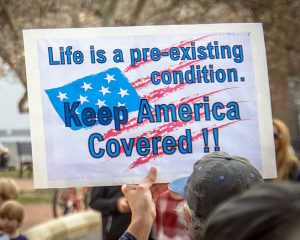 Photo: Ted Eytan via FlickrA 2017 rally in front of the White House in support of the ACA.

Can’t keep track of all the ways the Trump administration has weakened (many Democrats would say “sabotaged”) the Affordable Care Act?

Here are 14 (and counting) instances, according to a useful graphic from Haeyoun Park and Margot Sanger-Katz of the New York Times’ Upshot.

The most recent is the July 10 announcement slashing funding for ACA enrollment outreach workers, also known as navigators.

The first was at the very start of the Trump administration in January 2017, when officials took down consumer sign-up information from the ACA enrollment website.

The NYT’s feature is chronological, but it also can be useful to think about the measures as either enrollment-related or market-related.