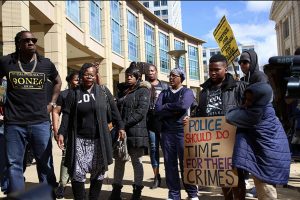 Often, when a police officer shoots an unarmed black man, news coverage is confined to the echoes of debate over who is right and who is wrong.  If journalists fail to advance the story beyond this narrative, they risk becoming unwitting accomplices in numbing the public to these tragedies.

This does a disservice to readers, viewers and listeners who seek better understanding of the full impact of what, in recent years, has become a public health crisis in our nation.

But there’s a deeper story to report on the widespread grief, outrage, fear and the neighborhood uprisings that take root and grow exponentially in the wake of police shootings in black communities.

The Lancet, for one, is pointing journalists toward that broader story in a recently published research paper titled, “Police killings and their spillover effects on the mental health of black Americans: a population-based, quasi-experimental study.”

“Police kill more than 300 black Americans – at least a quarter of them unarmed – each year in the USA,” the paper begins.

Beyond the immediate consequences for victims and their families, police killings might also affect the mental health of people not directly connected to the killings or to the people involved. Racism, like trauma, can be experienced vicariously. Police killings of unarmed black Americans might compromise mental health among other black Americans through various mechanisms, including heightened perceptions of systemic racism and lack of fairness, loss of social status and self-regard, increased fear of victimization and greater mortality expectations, increased vigilance, diminished trust in social institutions, reactions of anger, activation of prior traumas, and communal bereavement.

To tell this story, reporters may find themselves tracking the ripple effects of grief that wash over one community to another, reaching far beyond where the killing occurred.

What does that look like? How deep can reporters get into communities that are suffering greatly and perhaps wary of the media’s inquiries?

One example comes from the reporting of Sammy Caiola, health reporter for Capitol Public Radio in Sacramento, Calif., where officers gunned down 22-year-old, unarmed Stephon Clark, in the darkness of his grandmother’s backyard.

Caiola’s story, “Why Stephon Clark’s Death is Having Serious Mental Health Impacts – Especially On His Brother Ste’Vante” – was her first to examine the topic of mental health and how Ste’Vante’s erratic behavior after the shooting led to his diagnosis of post-traumatic stress disorder.

The story went a long way toward helping others in Sacramento understand how deep the wounds were among the grieving. Caiola continued to circle back to her sources in the community to chronicle what needed to happen before there would be healing. The results of her reporting, and her approach to the ongoing story can be found in the the new “How I Did It” piece Caiola wrote for AHCJ.