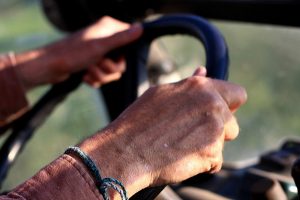 A recent way-too-long visit to the department of motor vehicles was good for two things: upgrading my about-to-expire license to Real ID and people watching.

I live in New York City, where the diversity provides a fascinating mosaic of current and would-be drivers of varying ages, races, cultures and backgrounds. I also saw at the DMV some folks who perhaps should think twice about maintaining their ability to get behind the wheel of a car.

I saw older people with difficulty hearing, who seemed confused about simple questions about current address and proof of citizenship, who struggled through the eye exam and presented mobility concerns.

No question, giving up a driver’s license and its ability to help maintain independence is a difficult decision. While many older people recognize their limitations and voluntarily stop driving, others won’t. It can be even more challenging when the person has some cognitive impairment but can still generally function well.

How do you know when it’s time for you or a loved one to hang up the car keys for good? According to this story from Harvard Health, a person who shows poor judgment, inattentiveness to what’s going on around him or her, clumsiness, and slow or inappropriate reactions, should not get behind the wheel. Doctors are legally obligated in some states to report unsafe drivers and those with certain medical problems to the state’s DMV. In other states, anyone can submit an anonymous complaint which may result in additional testing, license restrictions or suspension.

In 2015, more than 6,800 older adults were killed and more than 260,000 treated in emergency departments for motor vehicle crash injuries. That amounts to 19 older adults killed and 712 injured in crashes on average every day, according to the Federal Highway Administration. There were more than 40 million licensed older drivers in 2015, a 50 percent increase from 1999. This USA Today story points out that by 2030, as many as 90 percent of the 70 million Americans 65 and older will be licensed drivers. But it’s not as much about age as it is about the health of the driver, according to several experts quoted in the article.

Older adults often suffer from physical problems, such as arthritis, poor hearing or vision, slower reaction time and reflexes, or limitations from conditions like Parkinson’s disease, which significantly affect their ability to safely operate a vehicle, according to the National Institute on Aging. They also may be taking medications that make them lightheaded or otherwise less alert. They may get confused more easily in unfamiliar places and have more difficulty driving at night.  It’s no wonder that some question whether elderly drivers need different licensing rules. As this Psychology Today article points out, more than 75 percent of patients with mild dementia can pass the road test and drive safely – so that’s not as far-fetched as it sounds.

Some states require license review, testing or accelerated renewal after residents reach a certain age but others have much fewer age-related requirements. Either way, it may be up to an adult family member or caregiver to broach the subject if there’s a noticeable decline in abilities or uptick in minor accidents. Drivers 65 and older are 16 percent more likely than adult drivers (those 25-to-64 years old) to cause an accident, but pose less risk to the public than do less experienced drivers under age 25, who are 188 percent likelier than adult drivers to cause an accident, a RAND Corporation research brief concluded. While that difference is significant, the researchers said it is more modest than the conventional wisdom, which can be fueled by stories of like this one in the Washington Post.

Researchers noted that the data on traffic accidents, their cause, and the average miles traveled for different age groups can be unreliable and lead to misleading conclusions. But the new study used a different statistical method that relied exclusively on the Fatal Accident Reporting System, very high-quality data on all fatal crashes (rather than all accidents) in the United States since 1975.

Some new technologies, such as automatic braking and lane departure alerts can help prevent accidents and keep older adults safely on the road longer. Side airbags with head and torso protection have been estimated to reduce fatalities in nearside impacts by 45 percent for front seat occupants ages 70 and older, significantly greater than the 30 percent reduction estimated for front seat occupants ages 13-49, according to the Insurance Institute for Highway Safety (IIHS). “Smart” headlights, assistive parking, and blind spot warnings are among the Hartford Center for Mature Market Excellence’s top-ranked technologies enabling older adults to drive more safely.

Having a conversation with an older driver about limiting or stopping their activities is not easy. The National Highway Transportation Services Administration offers a clearinghouse for older road use safety (CHORUS), which highlights research, news, road safety and vehicle information. It includes a comprehensive section for families and caregivers with resources and ideas, including agencies and programs to assist with alternative transportation. This FAQ from the Insurance Institute for Highway also has a wealth of statistics and information on older drivers and safety.

Here are some questions to answer when reporting on this topic: