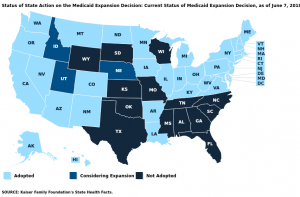 There’s been a spurt of Medicaid expansion activity in several states. Thirty-three states plus the District of Columbia have approved expansion (including Maine – more on that below.)

Virginia is the most recent state to expand Medicaid under the Affordable Care Act. Democratic Gov. Ralph Northam ran last fall on a Medicaid pledge – and the balance of power in his state’s legislature shifted too, with the GOP still in control but now with narrow majorities in both chambers. (Northam’s predecessor, Gov. Terry McAuliffe, also a Democrat, wanted to expand Medicaid but both houses of the legislature were more heavily Republican at the time and they blocked him.) Part of the deal between Northam and the Republicans was to pursue work requirements for the expansion population.

In Maine, a court has ordered outgoing Gov. Paul LePage to respect the outcome of last November’s voter initiative that backed Medicaid expansion and gave him one week to comply. No surprise – he appealed, so Maine is still up in the air. LePage has vetoed Medicaid expansion repeatedly when his state legislators approved it, and last fall’s ballot initiative has not changed his mind.

Medicaid is likely to be on the ballot in three more conservative states – Utah, Nebraska and Idaho – in November, although those initiatives haven’t all been certified yet. Another bid to get it on the ballot fell short in Missouri.

There had been high hopes among expansion advocates that a few more states, notably North Carolina, which elected a Democratic governor in 2016, or Georgia, where a segment of the business community supports expansion, would follow suit. That doesn’t seem imminent – at least not until we see whether and how power shifts in state races for governors and state legislators in November.

The Kaiser Family Foundation has a list and map of state expansion decision making here.