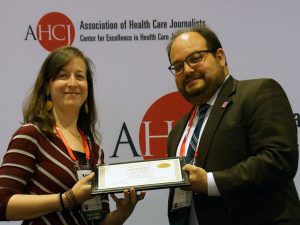 Kerry Klein, from Valley Public Radio, won first place for Health Policy (small outlet) in the Awards for Excellence in Health Care Journalism for her series “Struggling for care,” looking at the physician shortage in California’s San Joaquin Valley. Health coverage has vastly expanded in California through the state’s concerted effort to support the Affordable Care Act, expand Medicaid, and get people signed up. But it hasn’t solved access problems in places like the Valley.

For every 100,000 residents, the Valley has 39 primary care physicians, which is 22 percent less than the state average of 64. It has an even lower share of specialists. There aren’t enough nurse practitioners. And while the whole Valley has physician shortages, some people (and places) are hit worse. Smaller, more rural areas have even fewer doctors, and people on Medicaid and on health plans – including some in the ACA – with narrow networks have even more trouble, or have to travel further. One in four doctors in the Valley don’t accept Medi-Cal, California’s Medicaid program that pays less than many other states.

The Valley badly needs medical care. It has concentrated poverty and some of the most polluted air in the country. Asthma is widespread. Obesity and related chronic disease are big problems. People have to wait for routine care and, as Klein’s series makes clear, they face huge hurdles in getting access to, say, an in-network cancer specialist or a psychiatrist who can make sure a bipolar patient doesn’t run out of medicine.

In this essay, Klein explains her months-long project which included public radio pieces, web articles, maps and snippets of real people telling their stories. Her community also hosted a forum on possible solutions.