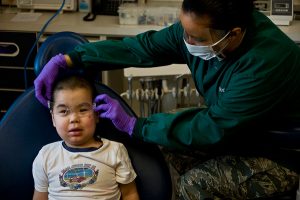 Researchers for the study, published online by the Journal of Public Health Dentistry, analyzed 10 years’ worth of Medicaid and electronic health records data for patients served by the Yukon-Kuskokwim Health Corporation, part of a tribal health system that provides care to thousands of Alaska Natives.

Dental therapists, who often are compared to nurse practitioners, are trained to deliver a range of services that include screenings, cleanings, preventive care, fillings and extractions. Alaska’s tribes began employing the specialists more than a decade ago to address high rates of untreated disease and chronic shortages of professional care, particularly in remote and isolated areas.

While the therapists work as part of dentist-led teams, dental groups such as the American Dental Association have fought the model. They contend that dentists alone have the training to perform what they consider irreversible surgical procedures, such as drilling and extracting teeth.  In spite of such resistance, Alaska’s program has endured. Dental therapists also are working in tribal communities in Washington and Oregon. Minnesota has a variation on the model. Vermont and Maine have approved the use of dental therapists. In spite of continuing controversy, the programs are under consideration in several other states.

The new study provides a first-known look at the long-term outcomes of Alaska’s dental therapist program. Electronic health record data revealed that in communities regularly served by dental therapists, nearly 47 percent of children received preventive care, compared with approximately 30 percent of children living in communities without access to dental therapists. Fewer children received extractions or were placed under anesthesia for the treatment of serious dental problems in places that received frequent services by dental therapists, researchers concluded. Adults also received higher rates of preventive care and lower rates of extractions, according to electronic health record data examined by the researchers.

Medicaid data sets reflected the same trends, but at generally lower proportions, according to the authors, a team led by Donald Chi of the University of Washington School of Dentistry.

The researchers acknowledged several limitations to their work, including differences in the data sets examined and the fact that they looked only at the utilization of dental services, not rates of disease prevention or remaining unmet needs within the communities.

Noting that “dental care is not a panacea,” the authors stressed the need for evidence-based strategies that would better equip dental therapists to help patients limit sugar intake, optimize fluoride use and to take other steps to protect themselves against oral disease.

“The eventual goal would be to harness the dental care delivery system as a way to improve oral health behaviors among individuals and norms within families and communities,” the authors wrote.

“State-level policies should consider dental therapists as part of a comprehensive solution to meet the dental care needs of individuals in underserved communities and help achieve health equity and social justice,” they concluded.

The study was funded in part by the Pew Charitable Trusts, the W.K. Kellogg Foundation and the Rasmuson Foundation, all philanthropies that have supported the use of dental therapists. Also providing support was the National Institute of Dental and Craniofacial Research, the William T. Grant Foundation Scholars Program and the Center for Advanced Study in the Behavioral Sciences at Stanford University.