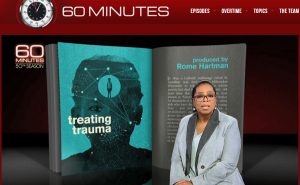 Photo: CBS’ 60 MinutesOprah Winfrey recently examined the impact of adversity on children and their development in a recent piece for CBS News’ “60 Minutes.”

In a recent piece for CBS News’ “60 Minutes,” the popular television personality examined the impact of adversity on children and their development as well as the emerging science spurring increased efforts to practice what is called “trauma-informed care.”

Such care aims to examine a person’s history of trauma and focus on how it has impacted their behavior or health. It is increasingly used in a variety of fields, including medicine, education and criminal justice.

Inspired by John Schmid’s “A Time to Heal” series in the Milwaukee Journal Sentinel, Oprah’s piece delivers a powerful made-for-television look at the effects of childhood trauma such child abuse and how it can lead to post-traumatic stress disorder and increase suicide risk.

The talk show host-turned business mogul has been public about her own traumatic childhood in Milwaukee and how school and several teachers helped pull her out of her past and move to a path of success. Scientists use different terms, but what it all boils down to, she says, is having love, value and trust while growing up.

Her segment, “Treating Childhood Trauma,” weighs efforts to grapple with such adverse childhood experiences and ‘scores’ health care providers are now using to help address it. She sums up the approach of trauma-informed care as practitioners asking “What happened to you” instead of “What’s wrong with you.”

While a trauma-informed approach can be integrated into current models used by physicians, therapists, counselors, judges, teachers and others, specific trauma intervention programs also have been created by various groups and experts.  “Addressing trauma is now the expectation, not the exception, in behavioral health systems,” according to the National Council for Behavioral Health.

Oprah says doing the piece for CBS changed all aspects of how she sees everyone and deals with people, from employees in her businesses to students in her school in South Africa.